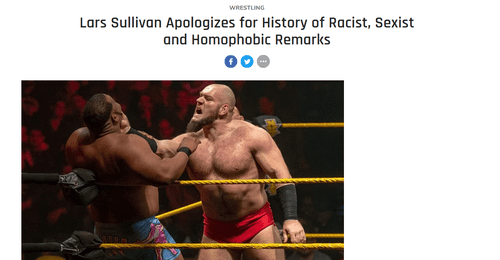 Born in 1988, Sullivan’s real name is Dylan Miley. He debuted on television in 2017, But recently a Reddit user unearthed some Incorrect comments that Sullivan posted to BodyBuilding.com, between 2007 and 2013, under the names “Disenfranchised” and “ElPerfecto.” Cautionary note to Americans who don’t realize they’re living in a police state: Sullivan might have gotten away with it had he not posted his photo to both accounts. [Lars Sullivan Apologizes for History of Racist, Sexist and Homophobic Remarks, by Dan Gartland, Sports Illustrated, May 10, 2019]

What did Sullivan write that invited the whopping, six-figure fine and a trip to re-education camp? Reported SI’s Gartland: 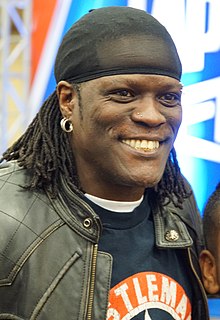 “They should be demonized for their religion,” Miley wrote in a thread about Muslims. “They are violent and have a violent agenda against America.”

“Not be racist, but it seems like white people are more willing to take responsibility of their own lives than blacks and Hispanics, who are all for government hand outs,” another comment reads.

Miley also said that WWE colleagues Kofi Kingston and R-Truth [Right]“look like they could be in a prison black gang.”

Big E, who teams with Kofi as part of The New Day, said on Twitter that “many” people in the WWE locker room are aware of Miley’s comments.[Links added]

Apparently, Sullivan knew his past comments might cause him trouble. He walked off a scheduled match with WWE and Hollywood star John Cena allegedly because of an anxiety attack. Sullivan was anxious all right, but not because he was nervous about grappling with superstar Cena in front of a screaming crowd. He was terrified his comments might surface: 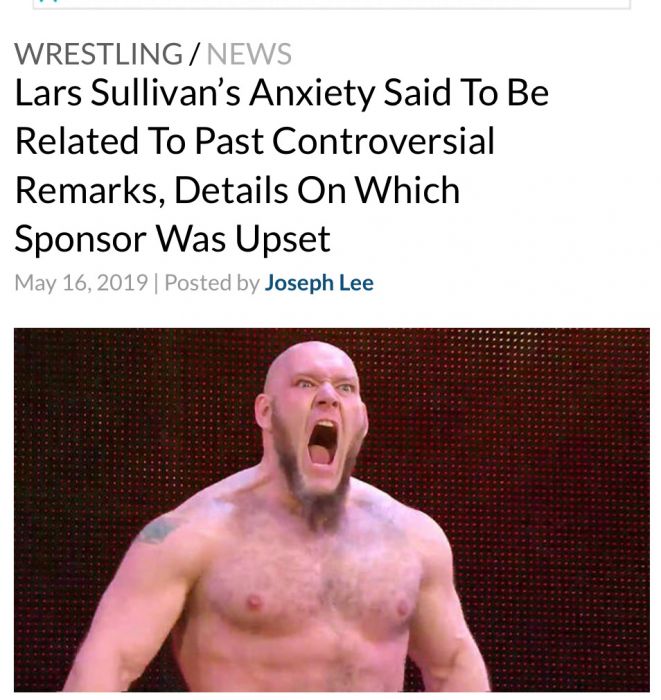 It was reported way back in January that Lars Sullivan was pulled from his then-expected RAW debut due to issues he had with anxiety, which at the time was believed to be stage fright and issues with performing in front of a crowd. In the latest edition of the Wrestling Observer Newsletter, it was reported that the reason Sullivan had anxiety was because of the controversial remarks he made before he was signed to WWE. At that time, Sullivan made comments mocking those with mental health, as well as racist and homophobic comments. The anxiety he suffered at the beginning of the year was reportedly over concern that the comments would resurface again once he became more famous. He was worried about the repercussions on the WWE, himself and those close to him.

WWE allowed him to go home before he was set to shoot an angle with John Cena on the January 14 episode of RAW, as they were planned to have a match at Wrestlemania (that Sullivan would win). WWE felt that Sullivan was “money” and learned from the situation with Mauro Ranallo’s depression and anxiety issues, so they “bent over backwards” for Sullivan. They told him to take all the time he needed and that they were behind him.

As we noted, WWE felt they had no choice but to punish Sullivan severely so they could keep him on the roster. It’s believed that while WWE may still push him as a major star at this point, they may not give him a major title due to how it would look.

[Lars Sullivan’s Anxiety Said To Be Related To Past Controversial Remarks, Details On Which Sponsor Was Upset, by Joseph Lee, 411Mania.com, May 16, 2019]

Did WWE have the right to punish Sullivan, and did the 30-year-old star have to sit still for it? Technically, yes. It’s just morally and politically disgraceful.

Here’s the clause in his WWE contract, as Lee reported at 411Mania:

Wrestler shall act at all times with due regard to public morals and conventions during the term of this agreement. If wrestler shall have committed or shall commit any act or do anything that is or shall be an offense or violation involving moral turpitude under federal, state or local laws, or which brings wrestler into public disrepute, contempt, scandal or ridicule, or which insults or offends the community or any employee, agent or affiliate of promoter or which injures wrestlers’ reputation in promoter’s sole judgment, or diminishes the value of wrestler’s professional wrestling services to the public or promoter, then at the time of any such act, or any time after promoter learns of any such act, promoter shall have the right to fine wrestler in an amount to be determined by promoter; and promoter shall have the right to immediately suspend wrestler and/or terminate this agreement pursuant to Section 12.

No wonder Sullivan was anxious. Any white man’s opinions might be perceived as “insults” to “the community.”

Needless to say, Sullivan groveled: “There is no excuse for the inappropriate remarks that I made years ago,” he said. “They do not reflect my personal beliefs nor who I am today, and I apologize to anyone I offended.” [Lars Sullivan Apologizes for History of Racist, Sexist and Homophobic Remarks, by Dan Gartland, SI.com, May 10, 2019]

Whether Sullivan means that we don’t know. But we do know the WWE’s black wrestlers thought the transgression was a teachable moment. They didn’t miss the chance to admonish another evil white man who dared to utter the unutterable, an opinion whites may no longer hold even privately:

On an episode of Edge and Christian’s “Pod of Awesomeness” WWE star Titus O’Neil, an African American, gave his perspective on the situation after a recent discussion he had with Sullivan.

“Lars sought me out and he sought out other people,” O’Neil said. “I sat with Lars for about 35 minutes in talent relations, just me and him.

“I looked at a man that was humbled, very apologetic, really very misguided as well. We dwelled and we talked about some things. Not to say there is ever an excuse but until you know somebody’s story until you know someone personally, you can’t take it personally, and you can’t come up with your own conclusions. Because there is a conclusion and there is a reason why people get to a certain point and do certain things.

“I believe in my heart that this situation with Lars will be a teachable moment for everybody from all walks of life. And I’m willing to put my name on this situation, just going with my gut and my heart, simply because of how he came to me as a man and came to other people as a man.

“I’m going to do my best to help him not get past this but actually learn from it.”

Thank you for reaching out to Mars Wrigley Confectionery with your comments.

We learned of Lars Sullivan's comments recently and share in your shock and disgust. As a values-based company, we find his behavior abhorrent and unacceptable. We have engaged the WWE to discuss this situation and seek to understand what actions they will take to swiftly address this matter.

We hope this information is helpful and wish you a great day!

Your Friends at Mars Wrigley Confectionery"

Even worse, the publicly-traded company, owned by Trump friends Vince McMahon and wife Linda, Trump’s former head of the Small Business Administration, now monitors the spouses of employees. When Huffington Post learned that Amy Mekelburg, a Jewish right-wing blogger, wrote some Politically Incorrect things about the Islamic invasion of Europe, the Cult Marx site contacted her husband’s employer, WWE, where he was a senior vice president. The company quickly tapped out and fired him. [An Online Agitator, a Social Media Exposé and the Fallout in Brooklyn, by Michael Wilson, The New York Times, June 6, 2018]

But funny thing: WWE’s squeaky-clean enforcers aren’t so hygienic when they know the hard Left isn’t sniffing around, or more likely, holding its nose to avoid smelling a particularly noisome controversy. In 2018, WWE signed an exclusive 10-year deal, worth hundreds of millions of dollars to stage events in Saudi Arabia, despite the kingdom’s notorious failure to be progressive when it comes to women’s or LGBTQ rights. [How Much WWE May Have Made With Saudi Arabia Deal In 2018, by Raj Giri, WrestlingInc.com, February 7, 2019]

One wonders: What do the makers of M&Ms think of that deal? Better yet, what do WWE’s black wrestlers think? How about the WWE’s ladies?

My guess: They don’t give a rip.

The Lars Sullivan story is a terrifying reminder what can happen to a top-flight white athlete for expressing opinions that fall outside what the Cultural Marxist Left has decided are the bounds of discourse—be it discourse about blacks, women, Muslims, or homosexuals.

It’s also a reminder that America 2019 is an occupied country.