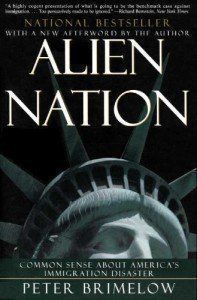 While both editions are now out of print, this first edition of the paperback book from 1996 contains an additional afterward not present in the hardcover edition. There are under thirty twenty-five twenty copies available.

The controversial, bestselling book that helps define the debate about one of the most important and hotly contested issues facing America: immigration.

Forbes senior editor Brimelow's alarmist, slashing anti-immigration manifesto is likely to stir debate. He maintains that the 1965 Immigration Act and its recent amplifications choked off immigration from northern and western Europe while selectively reopening U.S. borders to a huge influx of minorities from Third World countries. Many of these latter entrants are unskilled and require welfare support, and those who do work may adversely affect opportunities for poorer Americans, especially blacks, according to Brimelow. Because of multicultural programs, he charges, the new immigrants are not expected to assimilate, and thus they retain their separateness. Illegal immigration? two to three million entries a year? plus one million legal immigrants annually are causing, by his reckoning, an "ethnic revolution," because Asians, Hispanics, Middle Easterners and others shift America's balance away from the white majority, creating a strife-torn, multiracial society. Brimelow calls for an end to all illegal immigration, a drastic cutback in legal immigration, policies favoring skilled immigrants and elimination of all payments and free public education for illegals and their children. Copyright 1995 Reed Business Information, Inc. From Library Journal "Immigration has consequences," Brimelow (a Forbes senior editor and a contributor to the National Review) interjects repeatedly through this scattershot, argumentative tract against current immigration policy and practice. Claiming that the 1965 Immigration Act and later legislation in 1986 and 1990 have worsened a host of economic, political, and social problems in the United States, Brimelow cites supporters and critics alike of American immigration policy and his own interpretation of immigration statistics to disprove commonly held beliefs about immigrants' contributions to America, which he believes have been overemphasized. Brimelow argues that our environment is endangered, our public health threatened, our economy strained, our national unity diluted, and our politics fragmented all by an immigration policy that is out of control and captive to a ruling "elite," which he associates with the liberal establishment and political correctness. Though Brimelow scores some points in his shrill attack, his highly politicized and provocative language which often relies on ethnic stereotypes makes this book a polemic guaranteed to rally the faithful and offend most others.