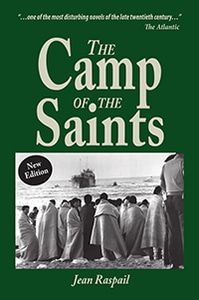 Originally published in France in 1973 and in English translation in 1975 by the distinguished American publisher Charles Scribner’s Sons, The Camp of the Saints has been described as the 1984 of the late twentieth century.

VDARE.com is honored to present the last new copies of The Social Contract Press edition of this gripping novel, which envisions the overrunning of European civilization by burgeoning Third World populations.

This 6th edition includes an interview with the author, Jean Raspail's comments to the French newspaper Le Figaro near the twenty-fifth anniversary of its publication, a collection of reviews of the book at the time it was first released in the United States, and two additional supplements: Lee Mare's introduction and his translation of Raspail's foreword to the 2011 French edition, titled "Big Other" [Reviewed by VDARE.com's Martin Witikerk: “BIG OTHER”—In New Foreword To CAMP OF THE SAINTS, Jean Raspail Names Those Wringing France’s Neck]. (softcover, 384 pages)