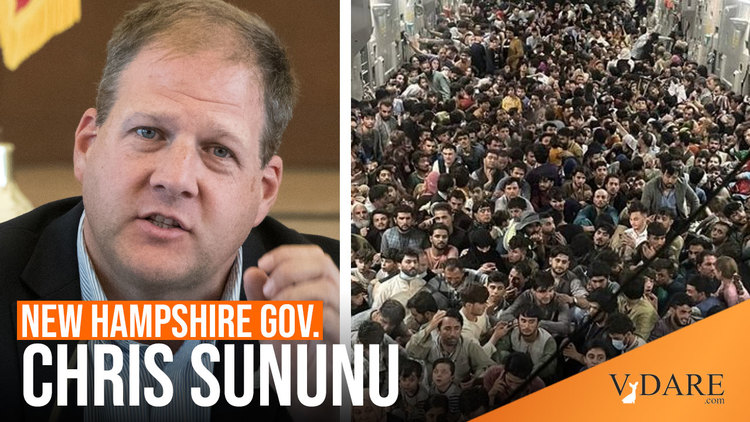 From: A New Hampshire Reader [Email him]

A friend copied me on a letter to the Governor of our state, Chris Sununu [Email him] on his plan to bring in Afghan refugees:

If you resettle Afghan "refugees" in New Hampshire, shame on you.  The overwhelming majority of these people are unvetted.  They are almost entirely fighting age men.  Afghan "refugees" as a group wreak criminal havoc wherever they have been resettled in the West.  If you bring this to the quiet Granite State, which is still a little bastion of peace in a nightmarish world, then you will be a facilitator of increased violence, rape, sexual assault, and the state's general descent into Third World status.  It would be evil were you to inflict this on people you are supposed to represent and protect, and it would not be forgotten or forgiven.

He’s obviously a pathological case. If you’re wondering about the peculiar Sununu name, John Sununu explained it to the New York Times in Behind the Sununu Surname, November 21, 1988

Gov. John H. Sununu of New Hampshire, whom President-elect Bush has selected as his White House chief of staff, says he has received hundreds of telephone calls about his heritage. Here is how he explains it.

His father's family came to the United States from the Middle East at the turn of the century. Some members of the family were from Beirut and the others were from the Greek Orthodox community in Jerusalem. His father, John, was born in Boston. Most of the last two generations of Sununus were also born in the United States.

What that means is that the Sununus were Christian Arabs who came to the US partly to avoid the persecution of people like the Afghan Muslims he’s importing. Chris Sununu has forgotten that lesson.