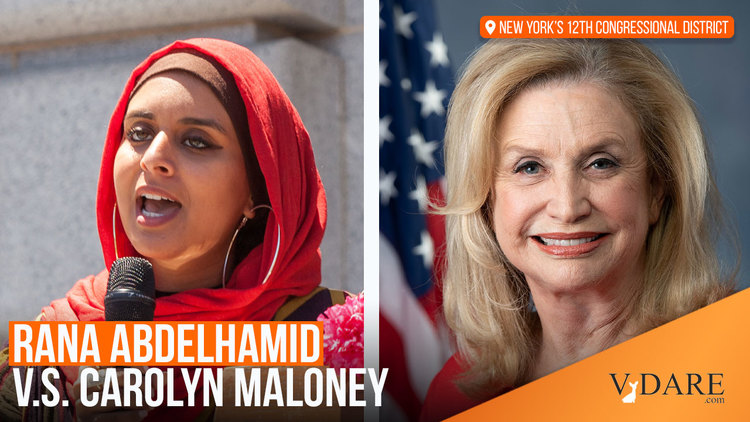 Re: NY-14 Winner Ocasio-Cortez No Fluke—The Democratic Party IS Tipping!

From: A New York Republican [Email him]

More evidence that the Democratic Party is “Tipping” in New York City.

You love to see it! A 75-year-old white woman is being primaried by a hijab-wearing Egyptian leftist daughter of immigrants. The greatest aspect of the story is that it's clearly a showdown between the pro-Israel Jewish donors of "centrist" Democrats and the ascendant Third World base of the Democratic Party. I say let it happen!

Maloney, who has elicited the ire of the left for opposing the 2015 Iran nuclear deal, among other things, won her 2020 primary by fewer than 4 percentage points.

“I really love my community and love communities in New York,” Abdelhamid, a native of Astoria, Queens, said. “It’s time for Congress to finally look like our communities and to have a representative who will fight for all of us ― not just certain groups or certain neighborhoods.”

The Democratic leadership versus the DSA is super entertaining to watch!

Jay Jacobs, chairman of the New York State Democratic Committee, issued a blistering statement ripping Abdelhamid for her alleged association with the Democratic Socialists of America, which has not endorsed her.

“Tell the voters where you and the DSA stand on ‘defunding the police,’ ending capitalism in America, unilaterally disarming the nuclear deterrent of the U.S. military and seizing private businesses that have to lay off workers, even when their survival requires it,” Jacobs said. “Ms. Abdelhamid should tell the voters that she favors the decriminalization of ‘sex work,’ making 26-year-olds who commit violent crimes ‘youthful offenders’ and the discontinuance of gang databases.”

James Fulford writes: Joe Crowley had served the Queens district now represented by AOC for 18 years. We tagged a number of articles about that story with our "White Guy Loses His Job" tag.

See also: The Democratic Party Has Tipped—Great News For The GOP (Which Doesn’t Deserve It), by Peter Brimelow.