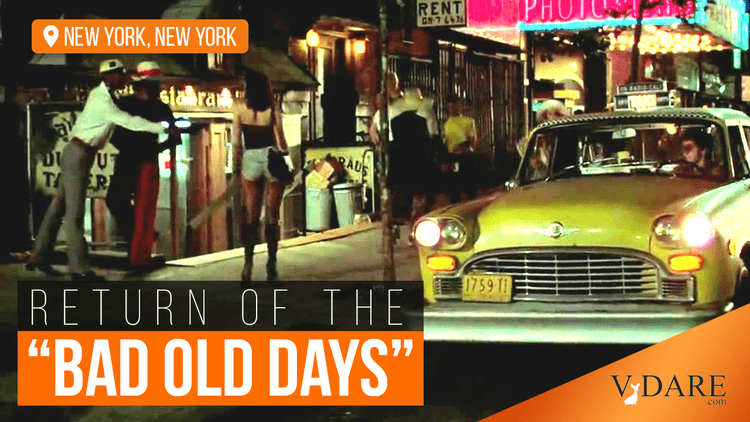 From: New York Survivor [Email him]

Here's an example of the "bad old days" back in spades.

At 6PM today, I walked "a gauntlet" from 40th & 8th Ave to 33rd & 8th. The devolution of this avenue (never high in the firmament), is swift. Every skel, miscreant, toothless skinny junkie bitch, cretin, menacing nut job is once again nodding, scratching, cussing, pissing on that Avenue. We the "normals" are the oddballs. I even saw a white chick (tight denim short shorts) obviously a hooker with her "man"—the usual black pimp. I ain't seen that on the Ave in almost thirty years!

I worked nightclubs in this "gauntlet" forty years ago So I remember it well, especially the young lads who tried to stab me every once and awhile.

It's back with vengeance.

The city better do something about it.

James Fulford writes: When the reader mentioned street awfulness in New York, I thought of the famous movie Taxi Driver, a scene from which is pictured above. That was made in 1976, and things would continue to get worse for another 20 years. Check out Ann Coulter's book Mugged for more details.