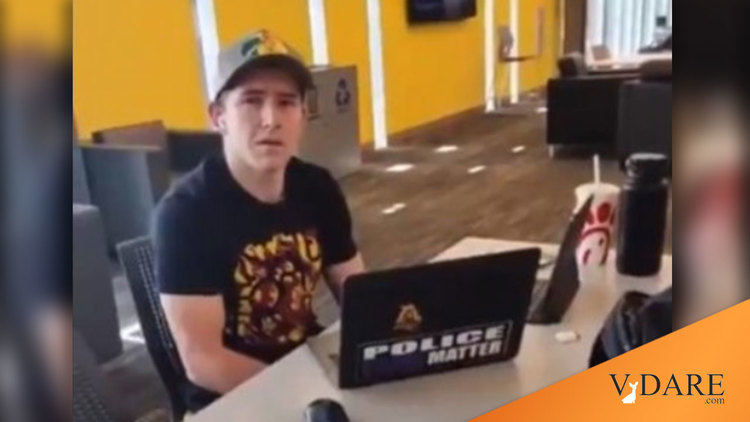 A few months back, I wrote a letter to VDARE.com about two white students at Arizona State University who got thrown out of the Multicultural Student Union by two black female students for displaying "Police Lives Matter" stickers on their laptops. VDARE.com published my letter, above.

Well, ASU has disciplined the two female students. They were given a warning and told to write an essay about how they will conduct themselves in a more civil manner in the future. Here is a link to the story:

Apparently, the two female students have learned nothing from this incident. They went on a rant about how ASU is racist and sexist.

In this extremely bizarre video, the two female students who harassed two male students in a viral video, reveal that ASU found them guilty and they were punished. pic.twitter.com/1VD4QbvZSX

The two white students should show up again at the Multicultural Student Union with more right-wing paraphernalia. They should encourage more students like themselves to rub salt in the Left's wounds across the country. It appears that they will not reform their behavior, thereby increasing the chances that they will face further discipline—possibly even getting expelled. It might be a good tactic to force academia to purge itself of more radical students.

We must remember that white people have civil rights, too. We should utilize them in our effort to redeem the country.