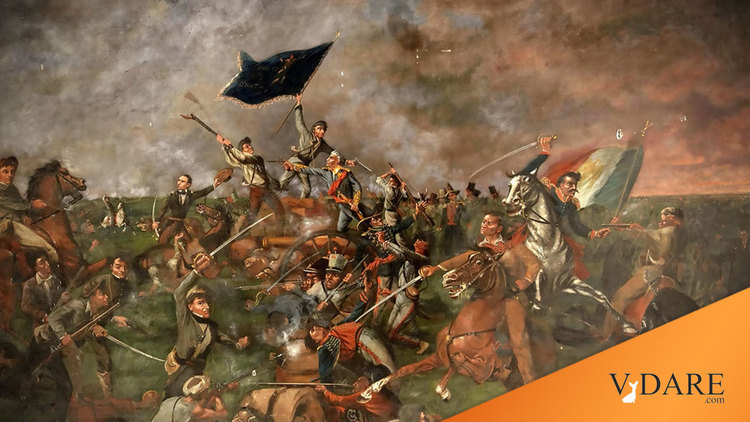 A Patriot Lawyer Writes On San Jacinto Day And The Tejanos Who Are Actually Loyal To The U.S.

I just saw the post about San Jacinto Day. At the end of the post, there was a line about disloyal Hispanics along the border. I am not so sure about that. There are certainly disloyal Hispanics in Houston, Dallas, and San Antonio (and disloyal Anglos in Austin), but I am not so sure about the border. They could be better classified as Tejanos, and their views on political issues—including immigration—are not that much different than working class whites in Appalachia and the Rustbelt.

The Tejanos in the Rio Grande Valley moved considerably towards Trump in 2020. Trump won Zapata County and nearly won Starr County, which went nearly 80% for Clinton in 2016.

There have always been Hispanics in Texas, and some fought with Davy Crockett and Sam Houston at the Alamo. They fought for the independence of a predominantly white country against an Hispanic nation. There are a lot of minorities who are perfectly content living in a majority white country. Actively working to keep it that way can do a lot more to win minority voters than the typical pandering of the GOP.

James Fulford writes: I know about the many Tejanos who are actually loyal to the U.S. See POLITICO Discovers Trump-Supporting Tejanos on the Border, and earlier, in  2005: Conversations With Tejanos, and The Eyes Of Texas Are Upon Bush's Amnesty—Coldly, by VDARE.com writer and Texas resident Juan Mann.

Jack Herrera writes that Trump’s success in peeling off Latino votes in South Texas had everything to do with not talking to them as Latinos.

His campaign spoke to them as Tejanos, who may be traditionally Democratic but have a set of specific concerns. https://t.co/JHJaPdpovi

Good for them, but they're being overwhelmed demographically.