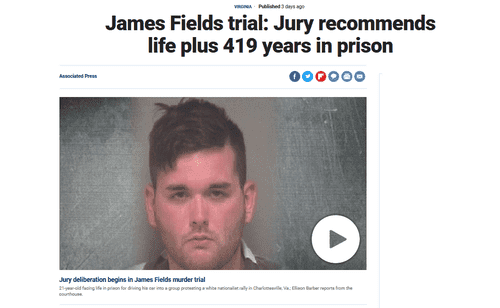 Re: A Washington State Reader Laments The Political Verdict In The James Fields Trial

From: Simon Krejsa [Email him]

Will the blacks and white leftists who rule the prison in which James Fields will be enslaved for the rest of his life allow him to be harassed, reviled, terrorized, brutalized, assaulted, gang-raped, and possibly murdered by white-hating black inmates? (Forced racial integration of jails and prisons is cruel and unusual punishment—for whites—in the sense of not only being cruel but also totally unnecessary.)

Or will he be entombed in "protective custody" and solitary confinement, 23-hours a day in a toilet with bars or a steel door with a small window so the guards can see if he's trying to commit suicide, until he dies in his 60s or 70s or 80s? The latter hell is more likely.

If an "antifa," anarchist or communist, white or black, had driven his car into a crowd in obvious self-defense, because he was attacked and terrorized by "neo-Nazis" and "racists" and "white supremacists," he would not have even been charged with a misdemeanor. Almost surely, all other facts being identical, the "white supremacists" and "racists" and "neo-Nazis" would have been charged with felony murder because an obese woman died of a heart attack, prosecuted and convicted of murder and all the other felonies and sentenced to life in prison with no chance of parole as was James Fields for transparently political-ideological reasons.

James Fields was convicted of murder and all the other felonies and sentenced to life in prison with no chance of parole and 419-plus years not for his actions but for "hate-speech" and "thought-crimes." Legally, whether or not he's a Nazi, a genuine Nazi as opposed to Trump and the "basket of deplorables," is irrelevant, or should have been so if "justice" was not vitiated by left-wing and racialist politics and ideology and the resultant iniquities and double standards, travesties and outrages and absurdities.

But even if his views on race and Jews were identical to those of Jared Taylor, John Derbyshire, Gregory Hood, James Kirkpatrick, and other race realists, he would still have been vilified as a "racist" and "Nazi" and convicted of murder and all the other felonies and sentenced to life in prison with no chance of parole for acting in obvious self-defense.