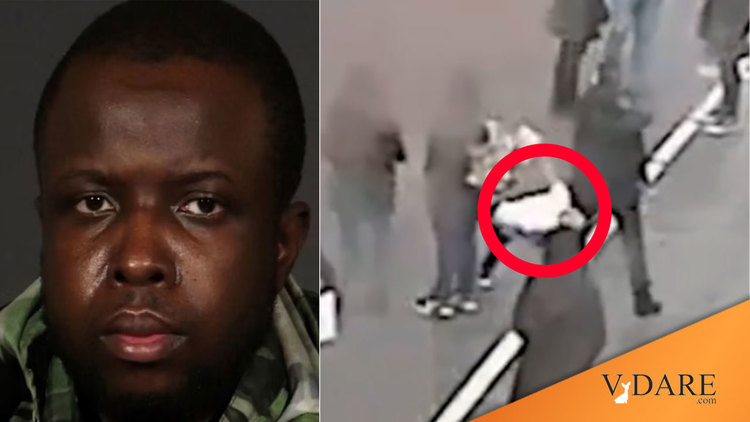 Breitbart reported this, but doesn't seem to have noticed the perp’s name is from Africa. Notice, in the video, no one helps the white woman (mother?) grappling on the ground with Mbaye until cops come.

A man who has a track record of assaulting strangers allegedly punched a four-year-old boy in the head in Times Square on Thursday, authorities say.

Police say the attack occurred around 3:20 p.m. at the corner of 7th Avenue and West 46th Street when Babacar Mbaye, 34, randomly pummelled the small child who was with his 43-year-old mother, WABC reports.

Surveillance footage obtained by the New York Post shows two women, one of whom is the four-year-old’s mother, going after the suspect. One of the women tackled the perp to the ground while the other swung an object in her hand while standing over him, the footage appears to show. Two police officers then burst into the frame, with one of them engaging the suspect on the ground as the woman who was battling the man gets up, the video allegedly shows. It is unclear which woman is the boy’s mother, the Post reports.

The boy received medical attention at the scene in Times Square.

While being taken into custody, Mbaye allegedly kicked a police officer.

James Fulford writes: Neither Breitbart nor the NY Post which covered this story used the words "black" or "white" to describe this incident. For the record, if a man's name is Babacar Mbaye, he's from Senegal, because everyone named Mbaye is, according to Wikipedia. One of the Mbaye family was Prime Minister of Senegal. Both Breitbart and the Post are considered, by Lefties, to be racist because they have been reporting black crime, but they keep backing away. See Hey, BREITBART, FEDERALIST—Our "Black Crime" Tags Are Better Than Yours!