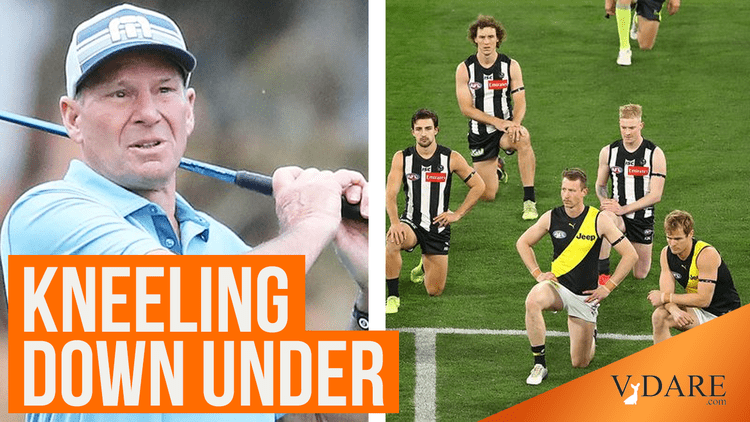 His Holiness, George Floyd (blessed be thy name), the patron saint of the Church of Anti-Racism, has crossed the International Date Line and the equator to make the sport of Australian Rules Football fully woke.

In peak virtue-signaling form, just prior to the start of the game between two of the AFL's grandest old clubs, the Collingwood Magpies and the Richmond Tigers, all players and umpires came together in the center of the ground to “take a knee.”  This was, they said in a statement on their behalf, to show "solidarity with our indigenous brothers and sisters for all people of colour." [SBS News - AFL players take a knee in support of BLM, June 11, 2020).

Signaling that they do not harbor any racially impure thoughts on the looters and other BLM criminals, or on deaths in police custody of Indigenous Australian felons, the mostly white Australian footballers spared no knackered woke cliché from another gallop around the track—"we see strength in diversity, it makes us better as a football club and as a community ... we will continue to learn and walk this journey together” yada, yada, yada …..

Not everyone was impressed.  Former Geelong champion footballer, Sam Newman (above left), whose physical playing style can best be euphemized as “uncompromising,” sheeted home the responsibility for the anti-white display to the AFL's corporate leaders.  Newman [Tweet him]said that the AFL's CEO, Gillon McLachlan, had intimidated the players into the woke gesture to try and avoid the fate of NFL Commissioner, Roger Goodell (who got in a pickle for being insufficiently woke over that football code’s knee-taking tantrum). 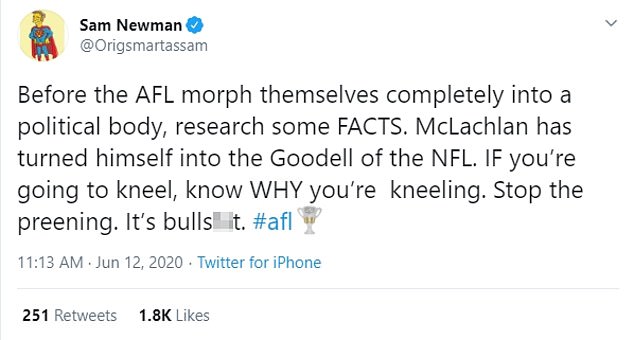 So what lies behind the AFL’s weak-kneed party line on “taking the knee”?  There seem to be three main reasons:

Sadly, Australian football has just shown that it will not be leading the resistance to the authoritarian, social-shaming, intolerant, morally-righteous, "anti-racist" mob of black criminals, dysfunctional, failing minorities and their white liberal auxiliaries.