Re: A Virginia Reader Object To Local Media Cheering The Indianization Of Loudoun County

From: An American Reader [Email him] 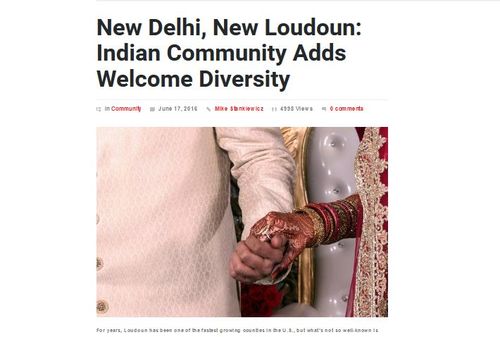 Like the “Virginia Paleoconservative”, I also live in Loudoun county after having resided in northern Virginia for nearly fifteen years. I recently escaped the increasingly-East Asian Indianized communities of Ashburn, Brambleton and South Riding to move further west into what is still (at least for now) Loudoun County countryside. While the overtly liberal Loudoun County Times finds “welcome diversity” in the overwhelmingly disproportionate influx of this particular immigrant group into northern Virginia, they predictably don't say very much about another immigrant group (pictured above) that's also making news, albeit for other reasons:

In June of 2016, Leesburg Police, along with federal authorities, raided a home suspected of MS-13 members, leading to several arrests. And in Fairfax County MS-13 related incidents in the first 4 months of this year jumped more than 160 percent compared with 2015.

For Federal authorities, a potentially big turning point happened in May of this year, as prosecutors convicted six MS-13 members for their roles in three murders and one attempted murder in Northern Virginia.

Note the mention in that article about the police action in Leesburg in the heart of Loudoun County.

I can attest firsthand that the claims Virginia Paleoconservative makes about entire communities in the Northern Virginia area being exclusively or nearly-exclusively East Asian are spot-on. The East Asians are in large part in northern Virginia to supply cheap IT/corporate labor in what can be argued as one of the most expensive areas in the country to live in.

In addition, the various corporate defense contractors are looking to groom this group of people for cleared IT positions, even within the most sensitive government Intelligence Community  agencies. This is being made possible with relaxed requirements for the issuance of such government clearances under the Obama administration in the name of "diversity". I like to tell people that, if they think Edward Snowden was a problem, hang around and wait awhile.

See a previous letter from the same reader.