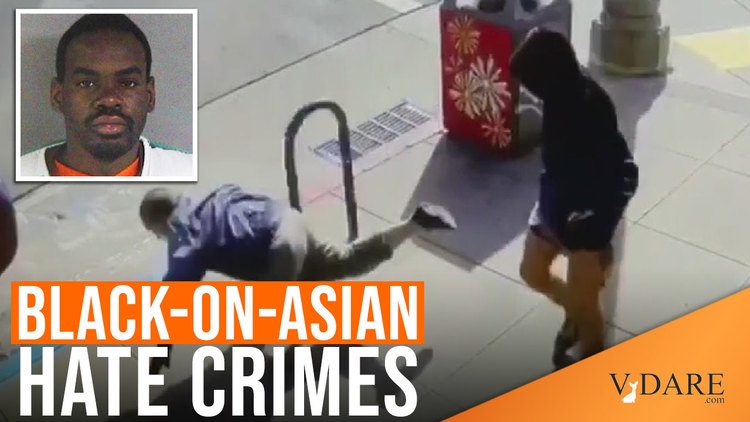 Earlier (March 2020): East-Asian Americans Under Attack. But Who Are The Attackers?

UPDATE, March 19, 2021: Some duplicate entries led me to miscount the number of posts. Twelve is still a lot. JF

Not counting this one, we've posted eighteen twelve times on the black-on-Asian attacks that have been reported recently, all in the month of February...which is not over yet.

When I say they've been "reported", of course, there's been a lot of "reporting" blaming it on Trump, who called out the Government of China over a virus that has now killed half a million American of all races, but really, blacks have been attacking Asians as long as I've been alive. Immigrant Asians are frequently poor enough to have to live near blacks, and Asians frequently operate small stores in black neighborhoods, which makes them targets of constant harassment and violence. Worse, their children sometimes go to school with blacks

According to Asian advocates, the whole Philadelphia district has been plagued by harassment and violence towards Asian students for many years. At SPHS, the assaults have occurred in the cafeteria line, in bathrooms, in stairwells, on school buses, and elsewhere. The incidents ran the gamut from verbal abuse, physical intimidation, blocking doorways, cutting in line ahead of Asian students in the cafeteria, use of anti-Asian racial epithets, and more serious physical abuse including shoving, kicking, and punching—sometimes at the hands of more than one assailant. Advocates have accused school officials, including school Superintendent Arlene Ackerman and Principal LaGreta Brown (both black) of indifference to the plight of Asian students in their charge..

Are Some Races More Equal Than Others?  By Abigail Thernstrom and Tim Fay, AEI, March 12, 2010

Steve Sailer broke out the black-on-Asian numbers based on the 2018 National Crime Victimization Study in Takimag in October:

In 2018’s Table 14, the BJS broke out the black vs. Asian offending rates. According to inadequate sample sizes, blacks aggressed against Asians 50,000 times vs. a little over 500 times that Asians attacked blacks, for an 89 to 1 racial ratio of total incidents. Because there are almost twice as many blacks as Asians, on a per capita footing that would be 46 to 1.

In 2019, the feds dealt with their problem of black vs. Asian statistics by no longer breaking out Asians in their Table 15 of offender vs. victim counts

Some of these recent attacks are versions of the "Knockout Game" in which a black youth will sucker-punch a random non-black and see if he can knock him out with one punch.  Sometimes this kills the victim, sometimes it injures him, and sometimes he survives without injury.

When the victim is white, this is known as "Polar Bear Hunting", which is why Steve Sailer has called it "Panda Bear Hunting" below. I'm sure there are people who would call that racist, but those same people would refuse to call the attacks themselves racist, see item 1 below.

Here's our list, and as I said, the month's not  over yet.