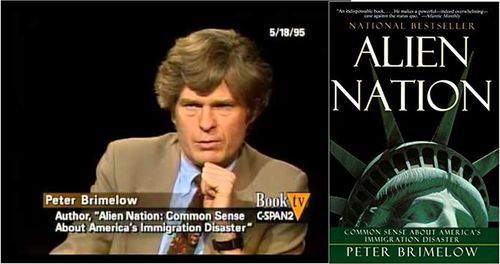 Re: Peter Brimelow's article The San Diego Border Crisis In ALIEN NATION, 1995: What Was Missing Was Not The Way. It Was The Will

From: A Patriotic Reader [Email him]

I just wanted to say that I have just read Peter Brimelow's book, Alien Nation. I found the book highly informative and enlightening in regards to the immigration crisis facing our country today. Considering that the book was written over 25 years ago just makes the issue more clear, as the situation has deteriorated even further.

If you’ve read this, Mr. Brimelow,  thank you for your time.

James Fulford writes: I've been working here for 20 years, after I won a Christmas competition, and Peter Brimelow asked if I needed a job adding links, and doing Internet stuff. He asked me how I came to be interested in the immigration issue, and I said "I read Alien Nation." That was not, by the way, an attempt to get on his good side, it's just that in the 1990s, about the only way you could find out about this stuff was to read it in a book, and it more or less had to be that book.