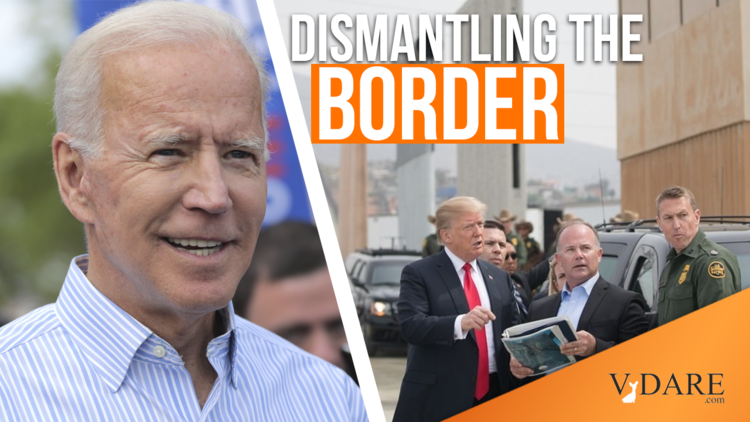 Abolishing Immigration Control: Biden Wants To Reverse ALL The Gains Made By Trump....And America

Elections have consequences. All of those amazing plans Stephen Miller had for Trump’s second term (punishing sanctuary cities, limiting asylum, more travel bans...and a continued immigration moratorium) seem lost in the wind of change preparing to sweep across Washington DC.

As James Kirkpatrick noted in a July 2019 piece here, Say It, GOP!—Or Just Give It Up: Open Borders Is TREASON! The Left Is ANTI-WHITE!

Barring a miracle from the judiciary branch, Joe Biden will be the next President of the United States. All of those executive orders and actions President Trump’s advisors promised were coming in his second term do seem lost, like tears in the rain.

Instead, we get to find out just how treasonous the Democrats are when it comes to putting the interest of the American people and the Historic American Nation first:

While the COVID-19 public health crisis and its impact on the U.S. economy will preoccupy President-elect Joe Biden during his first weeks in office, the incoming Democratic administration is also expected to quickly start dismantling President Trump's immigration agenda.

After Mr. Biden is sworn-in in January, his administration will move to fully restore an Obama-era program that shields 640,000 undocumented immigrants who were brought to the U.S. as children from deportation, halting Mr. Trump's unsuccessful efforts to end it, people familiar with the plans told CBS News. The incoming administration also intends to rescind Mr. Trump's travel and immigration restrictions on 13 mostly African or predominantly Muslim countries.

Mr. Biden will look to implement a 100-day freeze on deportations while his administration issues guidance narrowing who can be arrested by immigration agents. Obama-era memos that prioritized the deportation of immigrants with criminal convictions, recent border-crossers and those who entered the country illegally more than once were scrapped in 2017 by Mr. Trump so that no unauthorized immigrant would be exempted from being arrested and removed from the country.

A source familiar with Mr. Biden's plans said new guidance would be designed to curb so-called "collateral arrests," which are apprehensions of immigrants who are not the target of U.S. Immigration and Customs Enforcement (ICE) operations but are nevertheless taken into custody because they are in the country without legal status.

Mr. Trump made immigration a major theme of his insurgent and successful 2016 campaign. Despite frequent court challenges, his administration achieved rare success on this front in four years, reshaping the U.S. immigration system through more than 400 high-profile and little-noticed policy changes.

However, all of Mr. Trump's immigration measures — from the so-called "travel ban" and the efforts to end the Deferred Action for Childhood Arrivals (DACA) program, to new requirements for green cards and the asylum restrictions for migrants at the U.S. southern border — were enacted without Congress through proclamations, policy memos, regulations or other executive actions.

With his defeat, Mr. Trump's immigration policy changes are now vulnerable — and Mr. Biden's team is eager to begin the process of undoing most of them.

"All that stuff was done administratively through the [president's] executive authority, and so a new executive can basically reject those and start from scratch," a source familiar with the Biden team's plans told CBS News.

Perhaps there was ballot tampering in Georgia, Michigan, Wisconsin, Arizona, Nevada, and Pennsylvania, and the courts will throw out hundreds of thousands of illegal votes and miraculously give President Trump four more years as POTUS, but make no mistake: mass immigration and amnesty will do far more to nullify the votes of white conservatives and ensure the GOP is no longer a national party capable of even competing to win the electoral college in 2024.

So many who voted for Trump in 2016 thought we were going to get mass deportations and a wall, but instead all we got were promises of something far tougher in his 2nd term. Alas, such wishful thinking that could have easily been implemented in his 1st term is now replaced with promises of Biden quickly reversing those momentary gains from a one-term President Trump.

The lesson? When you have power, use it. As we can see by Biden’s promises to undo all of the gains under Trump on the National Question, the Democrats have no fear of exercising this power, even if it amounts to nothing more than treason.