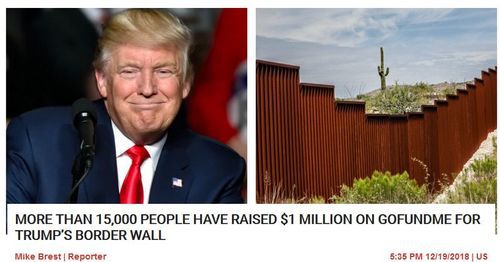 Some of the citizens of this country are committed enough to achieving genuine border security to pay for it themselves. Two examples follow.

The Daily Caller reported on Wednesday that a GoFundMe website had collected over a million dollars for the cause:

A GoFundMe page started by a Purple Heart Recipient has raised over $1 million in an effort to fund President Donald Trump’s border wall.

Brian Kolfage, a triple amputee who served in Iraq, created the fundraising page on Sunday. As of Wednesday afternoon, the fundraiser has received $1,003,544 from 16,333 donors.

Kolfage wrote in the description of the page, “Like a majority of those American citizens who voted to elect President Donald J. Trump, we voted for him to Make America Great Again. President Trump’s main campaign promise was to BUILD THE WALL. And as he’s followed through on just about every promise so far, this wall project needs to be completed still.” (Continues)

Americans believe that the wall should be built where it’s needed. 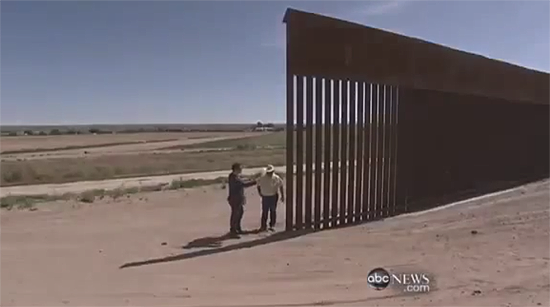 Another sign of dedication (or desperation) is shown by a Rasmussen poll earlier this week where 21 percent of respondents said they would donate funds to build the wall. That may seem a small percentage, but any number is impressive when you consider that our existing taxes are supposed to cover the #1 job of government, i.e. defending the nation from foreign harm. And many Americans feel their taxes are already too high.

If the effort were to receive some publicity, enthusiasm to participate would probably increase. The citizen funding idea was discussed on the Rush Limbaugh show on Wednesday with positive reaction.

Congress appears likely to refuse funding again for President Trump’s border wall, but one-in-five voters are willing to dig into their own pockets to privately fund the barrier on the U.S.-Mexico border.

A new Rasmussen Reports national telephone and online survey finds that 21% of Likely U.S. Voters say they would contribute money to a private fund set up to build the wall if Congress refuses to fund it. A sizable majority (69%) would not privately contribute, but 10% are undecided. (To see survey question wording, click here.)

One-in-three Republicans (34%) would contribute to a private fund to build the wall, compared to 10% of Democrats and 21% of voters not affiliated with either major political party.

Voters continue to believe illegal immigration is a major problem, and few feel the government is doing enough to handle it.

The survey of 1,000 Likely U.S. Voters was conducted on December 12-13, 2018 by Rasmussen Reports. The margin of sampling error is +/- 3 percentage points with a 95% level of confidence. Field work for all Rasmussen Reports surveys is conducted by Pulse Opinion Research, LLC. See methodology.

The president has warned that a partial government shutdown is looming following a heated meeting with Democratic leaders in which the two sides failed to come to an agreement over the border wall. Voters are getting more enthusiastic about building the wall, but they’re still not willing to risk a shutdown over it.

Among those who want the United States to build a wall along the Mexican border, 43% would contribute their own money to build it. Thirty-nine percent (39%) would not, but 18% are undecided.

Men are more willing than women to privately contribute and pay more in taxes to build the wall and fight illegal immigration. Blacks are stronger opponents of both ideas than whites and other minority voters.

Half (49%) of voters who Strongly Approve of the job Trump is doing would contribute their own money to build the wall if Congress refuses to fund it. Just 35% of these voters are unwilling to pay any more in taxes to fight illegal immigration. Among voters who Strongly Disapprove of the president’s job performance,  97% are unwilling to privately contribute to building the wall, and 79% aren’t willing to pay any more in taxes.

Illegal immigration and health care are the top voter priorities for the new Congress, but voters aren’t very hopeful that the president and Democrats in Congress can work together.

Most voters (52%) think illegal immigrants are a significant strain on the U.S. budget, and 45% believe illegal immigration increases the level of serious crime in America.

Voters agree the migrant caravans approaching the U.S. southern border through Mexico are a danger to the country and should be stopped at least temporarily.

Fifty percent (50%) think the U.S. military should be used along the border with Mexico to prevent illegal immigration. (Continues)