An MSM Celebration of Free Speech!

Today's San Francisco Chronicle has a moderately interesting examination of the history of edgy cartoons and the newspapers that spiked them. Thought-control freaks from Hitler to J. Edgar Hoover have feared the hard-hitting impact that spot-on visual ridicule provides.

Naturally the Chron is nominally supportive of the First Amendment, because newsroom scribblers are required to profess heartfelt allegiance to free speech on a regular basis. It's expected as part of the job description. The article is taken from a new book,Killed Cartoons: Casualties from the War on Free Expression

, and is printed in today's paper with some examples of 'toons that offended the sensibilities of editors and others.

Interestingly, several paragraphs are devoted to the Cartoon Jihad of 2005, when the Mohammed cartoons published in the Danish publication Jyllands-Posten caused rioting and deaths around the world as sensitive Muslims became enraged at a dozen drawings.

Admittedly, religion and cartoons can make a volatile cocktail. In 2005, the Danish newspaper Jyllands-Posten unleashed an unimaginable fury by publishing 12 cartoons featuring the prophet Muhammad. Fleming Rose, the editor who conceived the project, intended to bring attention to increasing intimidation of the free press by Islamic extremists. He never imagined what would follow.

Yes, free speech requires serious commitment and occasional courage. Such is the responsibility the press has to the proper functioning of democracy. We citizens need to know what is going on, even when it isn't pretty. 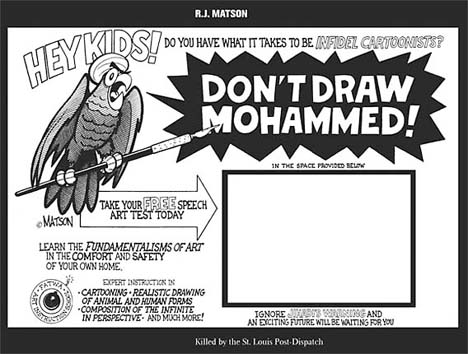 Apparently the Chronicle thinks readers have forgotten that the paper shrank back in fear, er exercised editorial judgment by not printing the controversial cartoons. In fact, Americans who were curious what the fuss was about had to go online to see the 'toons, since only a handful of US publications had the grit to print them. Certainly not the Chronicle, as its managing editor explained on PBS's Newshour, 2/9/06.

ROBERT ROSENTHAL: Well, we made a decision here that we felt we could describe it in words. [...]

It doesn't mean we haven't printed or published pictures in the past that we knew might offend people. But in this case, really the decision was made, that as I said, it was probably going to be a little gratuitous and that words were sufficient to describe what was really setting people off.

But today, the Chron is back, in support of controversial cartoons! So noble! Ain't the MSM grand?