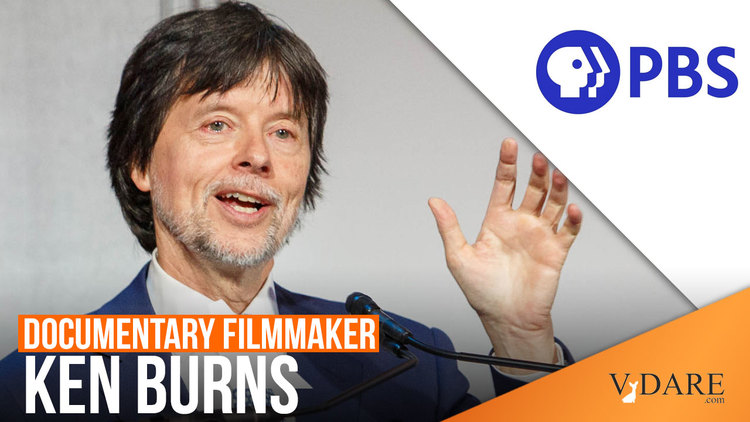 And Then the Diverse Came for Ken Burns

Filmmakers Call Out PBS For A Lack Of Diversity, Over-Reliance On Ken Burns
March 31, 20215:00 AM ET
Heard on Morning Edition
ERIC DEGGANS

Nearly 140 documentary filmmakers have signed onto a letter given to PBS executives, suggesting the service may provide an unfair level of support to white creators, facing a “systemic failure to fulfill (its) mandate for a diversity of voices.”

Titled “A Letter to PBS From Viewers Like Us,” the missive references Ken Burns, arguably one of PBS’ biggest non-fiction stars and creator of popular projects like Baseball, Jazz, The Civil War and an upcoming six-hour program called Hemingway.

Ken Burns’ Civil War was magnificent, one of the greatest things American television has ever done.

But his 18-hour Baseball was overly long. It would have been better as a 2-hour documentary about the Negro Leagues. Burns’ prime interest is usually in African-Americans. For example, for his 2009 National Parks documentary focused on a black Forest Ranger.

I haven’t paid much attention to Burns since then.

But that’s kind of like how David Lean never topped Lawrence of Arabia.

Citing data from the filmmaker’s website, it says Burns has created about 211 hours of programming for PBS over 40 years, through an exclusive relationship with the service that will last until at least 2022.

Such an arrangement leaves less room for filmmakers of color, who may struggle to gain similar funding or promotional support. And while PBS has created an initiative to elevate newly emerging filmmakers of color, such initiatives can also create a false narrative that non-white artists are predominantly lacking in experience, the text adds.

“How many other ‘independent’ filmmakers have a decades-long exclusive relationship with a publicly-funded entity?” the text asks.

How many other filmmakers made The Civil War?

Burns is 68 and probably losing a step. Wokeness works a lot like a wolf pack pestering a caribou herd, probing to find the older, sicker individual they can devour.

“Public television supporting this level of uninvestigated privilege is troubling not just for us as filmmakers but as tax-paying Americans.” …

PBS has released a statement with data pushing back on the letter’s assertions, saying 35 percent of the 200 hours of non-fiction programming planned for primetime this year was produced by diverse filmmakers. According to a spokesman, over the past five years, PBS has aired 58 hours of programming from Burns and 74 hours of projects by Henry Louis Gates, Jr., an African American scholar, director, executive producer and host of programs like The Black Church and Finding Your Roots.

… “It’s not about Ken Burns, it’s about this public television system living up to its mandate,” she adds. “On Asian Americans, we got five hours to tell 150 years of American history. Ernest Hemingway, one man, gets six hours of documentary in prime time … This kind of disparity is something that I wanted to call attention to.” …

PBS is already touting several diversity-focused initiatives, including a program to support the next generation of “emerging” BIPOC filmmakers and a collaboration with Nelson to create a two-hour film for Nova in 2022 on the impact of racism on the health of Black Americans.