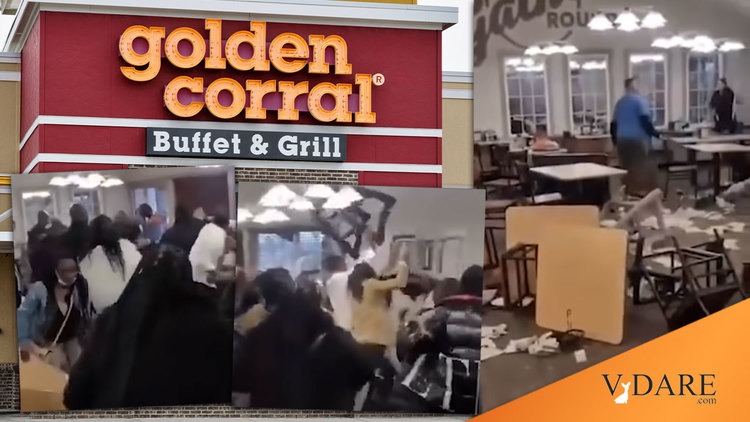 The Daily Caller has apparently missed another chance to not report race when the second big fight in a month “broke out,” as the communist mainstream media like to say, at a Golden Corral.

Last month, the Caller kept readers in the dark with his headline: BUFFET BRAWL: Fight Breaks Out At Golden Corral Over Steak, Chairs Fly Across Restaurant [by Laurel Duggan, February 1, 2022].

Amusingly, the Caller found a witness to say the cause wasn’t out-of-control blacks who fight at the drop of a hat because one felt “dissed.” Rather, he said, it was the Flu Manchu and face masks:

Police are investigating a massive brawl that broke out inside a Bensalem, Pennsylvania, buffet Friday evening.

Customer Alexis Rios said the fight was started by a steak-related misunderstanding, according to WPVI-TV. The customer in front of Rios was reportedly upset because his well-done steak was taking longer to prepare than Rios’ rare steak.

People had a hard time understanding each other due to COVID-19 face masks, which escalated tensions, Rios told WPVI-TV. “With COVID right now, masks and everything, nobody can hear nobody sometimes.”

Chairs flew because face masks made speech unintelligible? How about taking the mask down momentarily so you can understand each other, instead bashing one another over the skull with chairs because of a “misunderstanding.”

What the Caller thinks caused a near riot at a Golden Corral in Hialeah, Florida, we don’t know. Yet another “broke out,” and VDARE needn’t tell you the media are not reporting race.

The incident occurred this Saturday, when a group of people accused a man who was celebrating a party of having stolen a cell phone. A fight then broke out and a woman pulled a gun inside Hialeah's Golden Corral, police said. Everything was recorded on video while those involved fled.

Is it too much to ask for a description, given that the gun-wielding woman fled. Why yes, it is.

Hispanics are about 95 percent of Hialeah’s population, and just more than 4 percent of the population is non-Hispanic white. Do the math and watch the video.

The brawlers appear black, but the camera angle and distance from the fight make positive ID difficult.

At least Univision got one thing right. It wasn’t a “brawl,” which doesn’t involve guns. It was, the Spanish-language outfit said, a “pitched battle.”

I would say so.