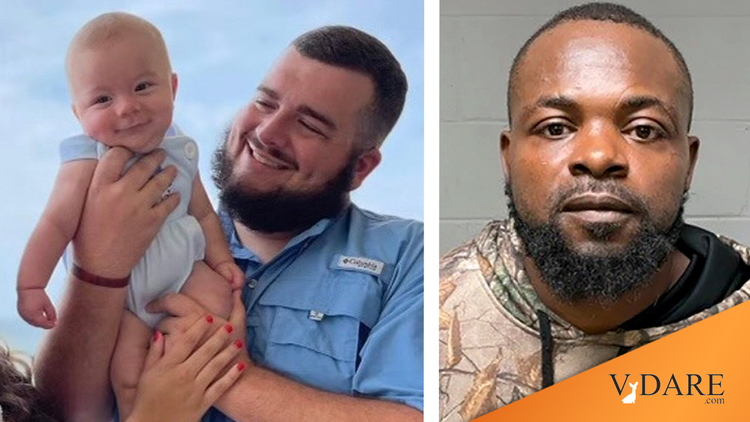 Dylan Harrison was a 26-year-old white police officer from Georgia who won't live to see 27. He leaves behind a wife and a six-month-old child.

He was shot and killed by Damien Ferguson, a black man whose "associate" had been pulled over by Harrison the night before for a traffic violation. Harrison used a taser on the "associate" [Cop Ambushed and Killed on First Shift in Retaliation Over Arrest: Police , by Anders Anglesey, Newsweek, October 11, 2021].

His murder was the obvious result of black entitlement not to be pulled over by the police—an entitlement that is deeply instilled by the media, our politicians, and the rest of our rotten system. The President of the United States campaigned for office by endorsing the set of beliefs surrounding this entitlement.

The entitlement is so deep, blacks feel justified in killing white officers who dare.

Even a few years ago, it might have been different. But in a city in which Mayor Lori Lightfoot declares she won’t interview with white journalists, it should come as little surprise that blacks consider themselves free to murder white police officers.https://t.co/eGw0zVKEMu

I will repeat my suggestion.

But there is probably a percentage of black crime for which enforcement doesn't make whites—or any other law-abiding group—safer. And, by "disengaging", we reduce the possibility of grenades going off.https://t.co/SYJZCgYTf1

If an officer cannot see the race of the driver, they can find out by running the plate and seeing the driver license information.

There is no need for a police department to publicize this practice. They can simply start doing it. The media would never pick up on it, and no civil rights group would dream of complaining that blacks aren't being pulled over enough—even if the reason for that is very unflattering.

I bet even police unions would sign on. They need living officers to pay dues.

If a department won't disengage, individual white officers should use heavy discretion to avoid situations with black subjects where the harm to the public is low but the risk to the officer is high.

An out-of-control and obviously intoxicated black driver, sure, initiate the pursuit. A black driver with expired registration? Skip it.