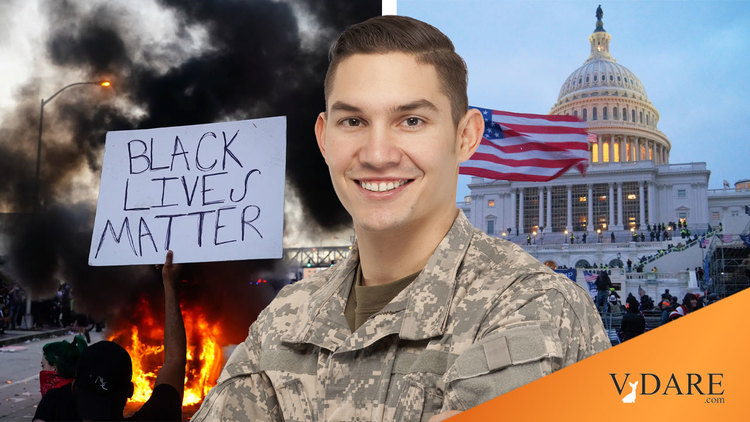 Army Brass: Soldiers Are Too Stupid to Grasp Why 500 BLM/Antifa Riots Are No Problem But One MAGA Riot Is the Worst Thing Ever

From the Daily Press:

WASHINGTON — During military training sessions to address extremism in the ranks, some service members have challenged why the Pentagon is not treating the violence during racial injustice protests last summer as equal to the deadly riot at the U.S. Capitol.

That the two events are viewed as equivalent by some troops has caught the Pentagon’s attention in its effort to educate service members that extremist views and activity — on either side of the political spectrum — go against the oath they took when they joined the military, the top enlisted leader told reporters on Thursday.

“This is coming from every echelon that we’re talking to,” said Senior Enlisted Advisor to the Chairman of the Joint Chiefs of Staff Ramón Colón-López. “Some people may think that, ‘all right, so the events of 6 January happened. How come you’re not looking at the situation that was going on in Seattle prior to that?’”

The military has started a Defense Department-wide effort to educate service members on what constitutes extremist behavior and why it is impermissible in the armed forces.

It started with stand downs, or daylong training and discussion sessions, ordered by Defense Secretary Lloyd Austin following the Jan. 6 attack on the Capitol. All of those stand downs must be completed by April 1.

Based on the feedback from those sessions, “I am concerned about the way that some people are looking at the current environment, and what they are thinking they can do and act upon based on their personal beliefs,” Colón-López said.

After the stand downs are completed there will be follow-up training and outreach. …

When questions arose of why last summer’s racial injustice protests didn’t trigger a similar review of extremist views, tough conversations have followed, “to make sure that military members understand the difference between Seattle and Washington, D.C.,” Colón-López said.

“Those are very, very tough conversations to have with people because sometimes they’re emotional about the subject,” Colón-López said.

“We cannot confuse a First Amendment grievance because of social injustice organization and some of the criminals that latched on to go ahead and loot, destroy and commit other crimes. There’s two clear, distinct groups right there,” Colón-López said, referring to the difference between peaceful Black Lives Matter protesters and looters who disrupted some of those events.

The looting has been used by some television commentators to convince viewers that the protests were equivalent to the Capitol attacks and that message has left a mark on some of the younger forces, Colón-López said.

In discussing what messages the troops are getting, Colón-López was delicate in his words. But he said he reminds them all that their oath defends free speech, and he encourages the younger service members to look into issues beyond what they see on TV.

Sometimes the younger troops take what they see on TV as, “OK so that’s what this means,” Colón-López said. “We have to educate them, no, that’s not what that meant.”

In Orwell’s Animal Farm, the smart pigs have to simplify things for the other animals: “Four legs good, two legs bad.” Perhaps the generals will need to simplify the message for the troops, something straightforward like “Black good, white bad.”