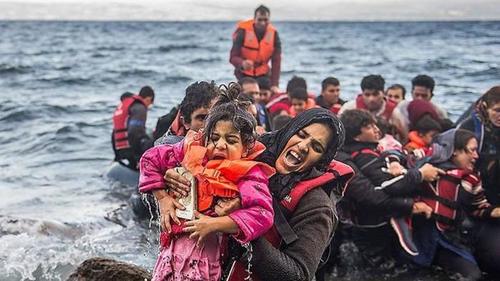 Germany now expects up to 1.5 million migrants in 2015: newspaper Reuters

BERLIN (Reuters) – German authorities expect up to 1.5 million asylum seekers to arrive in Germany this year, the Bild daily said in a report to be published on Monday, up from a previous estimate of 800,000 to 1 million. …

… The authorities’ report also cited concerns that those who are granted asylum will bring their families over to Germany too, Bild said.

Given family structures in the Middle East, this would mean each individual from that region who is granted asylum bringing an average of four to eight family members over to Germany in due course, Bild quoted the report as saying.

Not everybody is going to get legal asylum, of course. The Germans have already been kicking out some of the Balkan Muslims they can get to confess to not being Arabs. So you can’t just multiply 1.5 million by 5 to 9 people, which would of course be 7.5 to 13.5 million people. That’s probably too high … in this wave.

In the long run, well, either the German government will smarten up and learn how to use basic arithmetic before announcing its immigration policies, or it won’t. In the 21st Century, self-destructive stupidity is always an option.

Here’s the original in Bild in German. And not behind a paywall: Die Welt.