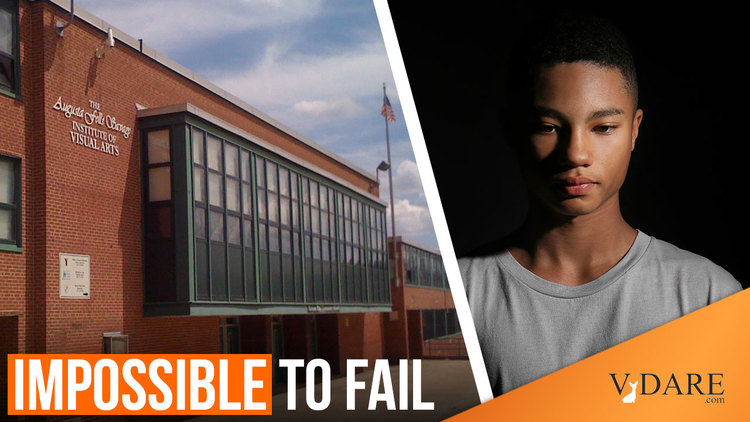 Welcome to a school system where the student body is 7.6 percent white and 76.6 percent black (do the math… 92.4 percent non-white).

Welcome to Baltimore, a city where white privilege has been depleted, with systemic racism, implicit bias and structural inequality erased.

What’s left? A world where the standards long ago set by your average white individual are a bridge too far for those who inherited the city via white flight.

A shocking discovery out of a Baltimore City high school, where Project Baltimore has found hundreds of students are failing. It’s a school where a student who passed three classes in four years, ranks near the top half of his class with a 0.13 grade point average.

Tiffany France thought her son would receive his diploma this coming June. But after four years of high school, France just learned, her 17-year-old must start over. He’s been moved back to ninth grade.

France’s son attends Augusta Fells Savage Institute of Visual Arts in west Baltimore. His transcripts show he’s passed just three classes in four years, earning 2.5 credits, placing him in ninth grade. But France says she didn’t know that until February. She has three children and works three jobs. She thought her oldest son was doing well because even though he failed most of his classes, he was being promoted. His transcripts show he failed Spanish I and Algebra I but was promoted to Spanish II and Algebra II. He also failed English II but was passed on to English III.

“I’m just assuming that if you are passing, that you have the proper things to go to the next grade and the right grades, you have the right credits,” said France.

As we dig deeper into her son’s records, we can see in his first three years at Augusta Fells, he failed 22 classes and was late or absent 272 days. But in those three years, only one teacher requested a parent conference, which France says never happened. No one from the school told France her son was failing and not going to class.

In his four years at Augusta Fells, France’s son earned a GPA of 0.13. He only passed three classes, but his transcripts show his class rank is 62 out of 120. This means, nearly half his classmates, 58 of them, have a 0.13 grade point average or lower.

Do you understand what’s about to happen in this century, where anti-white sentiments manifest in not just the celebration of mediocrity, but the removal of all standards once safeguarding the average achievement capability of a majority white nation?

Somehow, this entire situation and the porous public schools in nearly 75% black Baltimore will be blamed on white people. Never mind Baltimore City Schools spends $16,000+ per pupil (third highest of any school system in America), for historic white racism is the real villain behind this entire sordid scandal of innocent black bodies failing upwards…

Somewhere, the Chinese leadership is laughing hysterically. They know this century belongs to their people, because the American people succumbed to a greater threat than bombs, bullets, nuclear weapons or even death… that of being dubbed a “racist.”