BBC TV America just acted out a timeless tableau for its American viewers: Jane O’Brien and Laura Trevelyan were covering the drastic effects of a Texas hurricane. But the BBC must work an anti-Trump angle into all coverage. And as Texans have a way of banding together, they make poor fodder for the Beeb.

So, with no piteous Third World refugees to exploit, the Beeb made due with a hapless African-American family blaming the government for not rescuing them from only hip-deep water. The idea of wading to a better location never seems to have occurred to them. Nor the fact that, in the midst of a colossal natural disaster, their non-life-threatening situation might not come at the head of the line for emergency responders.

What ensued next was a priceless exposé of the BBC’s failed narrative: A boat appeared, piloted by a young Asian American man (Probably 2nd generation Vietnamese). He spoke with a confident Texas accent and had a very typical can-do demeanor. He offered to ferry the blacks to dry land. They accepted. No drama no bravado, just quiet good-natured confidence. The Beeb didn’t show the family being ferried to safety.

I doubt the average Beeb watcher grasped what they saw here. It seems Vietnamese can become Texans in a generation. Not so for most African-Americans. On some deep level, they react as hostile dependents on the larger society. After 300 years, they still demand we save them from themselves.

Private owners of these air boats - usually used for duck hunting - are bringing them to Houston to rescue people pic.twitter.com/dNo9pamb5c

Subsequent footage on the net shows the usual looting. So far I have yet to see any images of people looting food, water, blankets, etc. 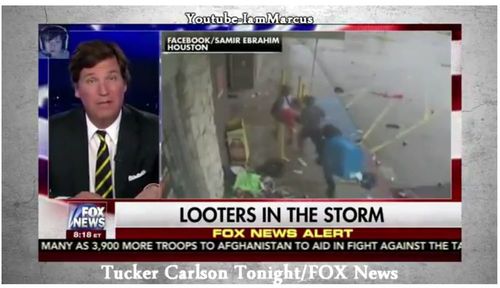 Hurricane Katrina was this scenario writ large. Black New Orleans reacted to the predicted storm by not preparing. Then they retreated through shallow water to a stadium in which they ran amok. They also engaged in massive looting and violence against fellow citizens. They did absolutely nothing to help themselves. It took the U.S. Army to pacify the city.

After I fled from the declining state of New Jersey, we had a deep blizzard in Pennsylvania. Roads were impassable and a State of Emergency was declared. At some point, I heard the unmistakable sound of a tree collapsing in the deep snow. It blocked the road on which I live. My neighbors and I sectioned the tree, stacking the logs neatly on the property of the elderly couple from whose property the tree fell. We (I) also freed a hanging cable from a suspended piece of blow-down. We then returned to our homes and fireplaces. We needed no assistance assessing the situation or organizing.

This is what actual Americans are like. Two hundred years ago we would have reacted the same to a washed-out road, an Indian attack or a barn raising.

This is a pretty anodyne tale except that while this was going on, just across the Delaware River, New Jersey residents were haranguing every level of government to save them from things they had no intention of lifting a finger to address.

And that is, in a nutshell the difference between Americans and the people the Beeb cares about.