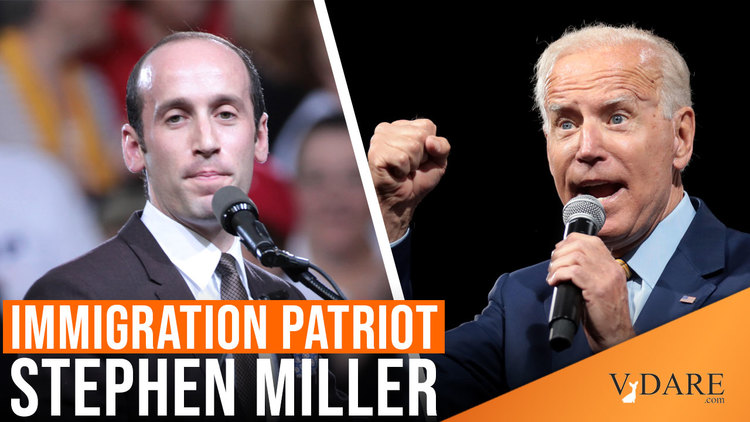 Stephen Miller is a top immigration authority who got Washington experience working for Senator Jeff Sessions and later for President Trump in the White House. Lately he has been appearing on TV discussing the threat posed by the new administration’s border policy.

President Biden’s proposed immigration legislation is beyond extreme in its intent—Miller reports that if passed, it would crush America’s fundamental powers as a nation, namely to control who enters the country. Biden’s borders will melt into nothing as idealized by globalists, transforming citizens into powerless serfs.

Most of the foreigners hope to steal American jobs by working extra cheap and avail themselves of generous social services, but there’s nothing to stop enemies from entering among the hordes. Head-choppy jihadists can easily dress like Hispanic foreigners to enter for their goal of murdering the hated infidels of the USA.

In addition, more than 10 million Americans are jobless because of the Wuhan virus and shouldn’t be replaced by invasive aliens.

And previously deported foreigners will be invited to re-enter. Amazing, even for Democrats.

A spare video is here.

MARIA BARTIROMO: A new border crisis is afoot with congressional Democrats unveiling an ambitious immigration reform bill on Friday that would extend amnesty and citizenship to nearly 20 million illegal immigrants, a population five times the size of Los Angeles. This legislation comes hot on the heels of [P]resident Biden’s sweeping executive orders to erase [P]resident Trump’s border legacy. Stephen Miller was a senior adviser to President Trump and the architect of the administration’s immigration plan; he joins us this morning.

Stephen it’s great to have you. Let me just point out that you have studied immigration issues for more than a decade. I remember years ago you were a congressional staffer in the House, then you moved over to the Senate. You were studying and working on immigration issues in the Senate before joining President Donald Trump. so give us your expert opinion and assessment of President Biden’s new immigration bill.

STEPHEN MILLER: Thank you, and the reason why I’ve studied immigration so closely is because it’s so fundamental to what it is to be a nation, the right of the people living in a country to decide who enters that country, on what conditions, for how long and how to establish national boundaries and borders. That’s fundamental to what it means to be a country.

The legislation put forward by President Biden and congressional Democrats would fundamentally erase the very essence of America’s nationhood. For the first time I believe in human history, this legislation proposes sending applications to previously deported illegal immigrants and giving them the chance to re-enter the country on a rapid path to citizenship — this is unheard of.

These would be people that ICE officers, at great time and expense, found large numbers of them with criminal records returned to their home countries at taxpayer expense. And now we’re going to have the Secretary of State and Homeland Security mailing applications for readmission and amnesty to previously deported illegal immigrants?

This is madness. Now this is on top of the fact that the current administration has already dismantled border security, canceling President Trump’s historic agreements with Mexico and with the northern triangle countries, restoring catch and release and additionally gutting interior enforcement issuing a memo preventing ICE from removing the vast majority of criminal illegal immigrants that it encounters.

And the last thing I’ll say about that memo is that they have engaged in a fraudulent representation to the court in the Texas litigation because they are claiming this is a resources issue. I know for a fact that ICE has the resources to remove these public safety threats. This is a policy choice disguised falsely to the court and to the country as a resource issue. That is a lie, and it’s a lie that threatens public safety.

BARTIROMO: Wow, and I know that the ICE, Border Patrol men and women are now being told that they have to get authority to make any moves. They need authority from above before detaining anyone.

I spoke with Mark Morgan, the former head of Customs, Border Patrol, and he told me that we are averaging 3500 apprehensions every day, and then another 500 turnbacks. So you’re talking about 4000 people coming to our border areas every day. Let’s take a look at this map because we have a map showing all of the the [sic] most porous areas pretty much, and as we zero in on this map we see Texas as well as California and the Rio Grande area. This is the area, the Rio Grande river that is most vulnerable.

I actually took the show to El Paso and witnessed people coming across then. I wanted to mention this because this is one of those pocketbook issues where it impacts people’s families and their lives. You can talk about it as a headline immigration bill, but when you zero in on what this means with 4000 illegals coming in every day, you really get a sense of how this impacts the American families. Walk us through it. Tell us what’s motivational.

MILLER: I’ll give you a simple example. So right now under the current administration, they are failing to abide by the CDC guidance and they are processing for entry and release 100 percent of illegal immigrants under the age of 18. In other words, any illegal alien 17 or younger who is smuggled to the border or trafficked to the border is being processed for admission through Health and Human Services and then resettlement in the country. So ask yourself — who is going to pay for the education? What does it mean when classrooms — [G]od willing — reopen? What does it mean for classroom size? What does it mean for healthcare? Then you add on top of that, the families that are being released — who’s paying for the medical bills? Who’s paying for the health care costs?

You know you pay with your local property taxes in many cases and your sales tax and many other forms of local tax on your rent, on everything that you do in your life, and one way or another you’re paying for those local services. So when people show up illegally, having never lived here a day in their lives, that’s coming out of your pocketbook.

BARTIROMO: Yeah, there’s a good piece in the LA Times that I want to point out because under President Biden’s direction border, officials on Friday began processing the first of an estimated 26,000 people who have pending cases in the United States. They’ve reversed the asylum system as you say. those people who were waiting in Mexico now they will be in the United States. it radically alters the asylum system and it was actually one of your administration, President Trump’s administration’s most popular and successful parts of the immigration plan.

MILLER: President Trump secured the southern border through his deals with Mexico, through his deals with El Salvador, Guatemala, Honduras, and others. We were able to ensure that if you were apprehended illegally, you were safely and humanely returned home. This was a game changer. President Biden hasn’t only failed in his duty to protect American citizens — he has went out of his way to privilege illegal immigrants over American citizens. So when your kids can’t go to school, when your spouse or you have been laid off because of covid-related shutdowns, 200 countries in the world can send their illegal immigrants to our border without masks, without vaccines, without healthcare, without any rules at all. How is that fair? How is that just? How is that moral? How is that right? it’s not.

BARTIROMO: Well, it’s horrible to think that our schools are closed, but the border is wide open. This is the reason that Texas, the state of Texas is suing, and we had the AG, the attorney general of Texas Ken Paxton on this program last week. Listen to what he had to say — got to get your reaction.

TEXAS ATTORNEY GENERAL KEN PAXTON: These were laws put in place by elected representatives, basically requiring that if you come here illegally and you’re caught, that you’d be deported, and he basically said no we’re not going to do that anymore. The border is open, you can stay, and we’re not going to deport you, and you can see what’s happening. We’re having people come in from other countries, up through Central America. They believe that he has opened the border for them, and I think most Americans believe that he’s opened the border. That’s not just a change in policy, that’s a change in law, and if he wants to do that, seems to me that he could go back to Congress and get pretty much what he wants.

MILLER: The attorney general of Texas is 100 percent right. This is a fundamental constitutional issue — does the president of the United States have the authority to suspend law at will? Because if he does, it’s not just immigration, then President Biden can rewrite every federal law to his liking. He does not need Congress at that point in time. He would assume the powers, not of a president, but of a king. That’s why it’s so important this legislation, that this executive action, I’m sorry, be stopped in court because this can only be done legislatively, and I would submit to you a bill sent to Congress to release criminal aliens in mass would never ever have a chance of becoming law which is why this was done by executive action.

BARTIROMO: Yeah unbelievable. Real quick, Stephen, have you spoken with President Trump? There are reports that he is perhaps thinking about running again in 2024, perhaps with Florida Governor Ron DeSantis. We also know that the president will make his first public appearance this upcoming week at CPAC. What are your thoughts on President Trump right now?

MILLER: Yes well I have had the opportunity to speak to the president, and he’s very excited to make his upcoming address to CPAC where you will hear him lay out his positive vision for the future of this country — a vision where we stand up to China as the president was doing before he left office and reclaim our manufacturing, a vision where our schools are open and our border is closed to illegal immigration, a vision where the big tech monopoly is dismantled and free speech and free expression and free thought can reign because that’s what this country is about. He’s going to present an optimistic vision for a country where communities are safe, where criminals are behind bars and where everybody can earn a decent high paying wage and produce products here in the United States where they should be made — not in China, not overseas.

BARTIROMO: I’m really glad you mentioned the cancel culture situation because that continues to deepen and is a serious problem. I would think on either side of the aisle you don’t want people just canceling out groups. Stephen Miller, we’ll continue that conversation when we see you next time. Thank you so much.