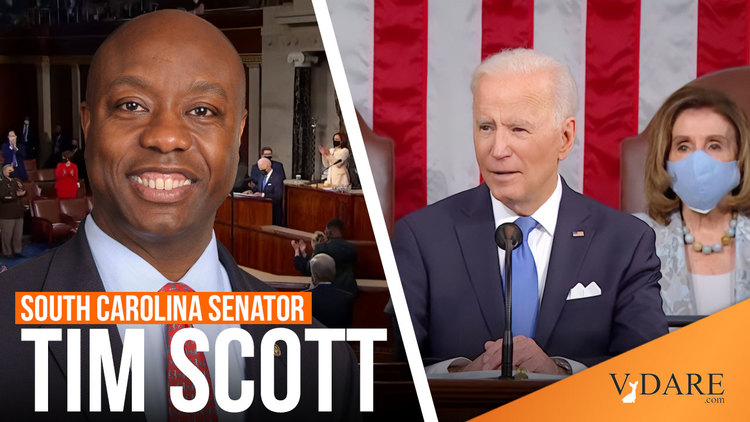 Earlier: Joe Biden's Speech: Lord, Give Me The Confidence Of A Mediocre White Man

Here's what Biden had to say about immigration in his recent speech:

And here’s what else we can do. Immigration has always been essential to America. Let’s end our exhausting war over immigration. For more than 30 years, politicians have talked about immigration reform and we’ve done nothing about it. It’s time to fix it. On Day 1 of my presidency, I kept my commitment and sent a comprehensive immigration bill to the United States Congress.

If you believe we need a secure border, pass it, because it has a lot of money for high-tech border security. If you believe in a pathway to citizenship, pass it. There’s over 11 million undocumented folks, the vast majority here overstayed visas. Pass it. We can actually—if you actually want to solve the problem, I have sent a bill to you, take a close look at it.

We also have to get at the root of the problem of why people are fleeing particularly to our southern border from Guatemala, Honduras, El Salvador. The violence. The corruption. The gangs. The political instability. Hunger. Hurricanes. Earthquakes. Natural disasters.

When I was president, my president—when I was vice president, the president asked me to focus on providing help needed to address the root causes of migration. And it helped keep people in their own countries instead of being forced to leave. And the plan was working, but the last administration decided it was not worth it. I’m restoring the program and asked Vice President Harris to lead our diplomatic effort to take care of this. I have absolute confidence she will get the job done.

Now look, if you don’t like my plan, let’s at least pass what we all agree on. Congress needs to pass legislation this year to finally secure protection for Dreamers, the young people who have only known America as their home. And, permanent protection for immigrants who are here on temporary protective status who came from countries beset by man-made and natural-made violence and disaster. As well as a pathway to citizenship for farmworkers who put food on our tables.

Look, immigrants have done so much for America during this pandemic and throughout our history. The country supports immigration reform. We should act. Let’s argue over it. Let’s debate over it. But let’s act.

Here's what black GOP Senator Tim Scott said in response.  The "CTRL-F immigr" test got no response, but Scott did criticize Biden measures that made it easier for illegal immigrants to enter.

We should be expanding opportunities and options for all families—not throwing money at certain issues because Democrats think they know best. Infrastructure spending that shrinks our economy is not common sense. Weakening our southern borders and creating a crisis is not compassionate.

Nothing about legalizing illegals. Senator Tim Scott, a black Republican Senator in South Carolina, has a NumbersUSA  rating of D-.