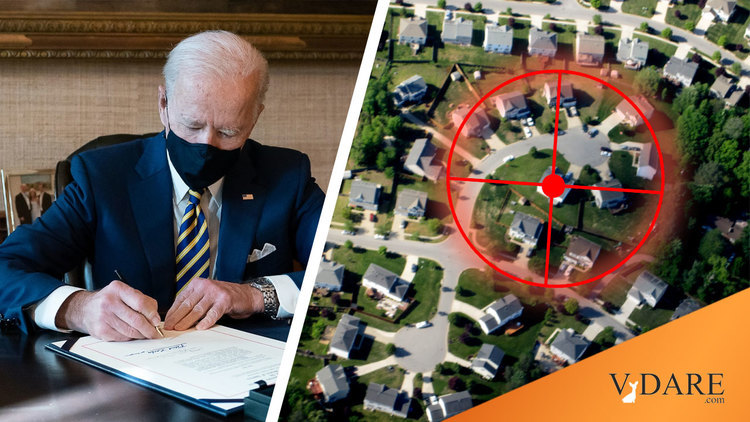 Biden To, More Or Less, Abolish The Suburbs

Yesterday I explained in my new Taki’s Magazine column that the big enchilada of the “equity” movement is your equity in your home. Now, from USA Today:

Biden’s infrastructure bill aims to curb exclusionary zoning, which has led to racial segregation and climate vulnerability for low-income Americans.

President Joe Biden wants cities to put more apartment buildings and multifamily units, such as converted garages, in areas traditionally zoned for single-family housing. As part of his $2.3 trillion infrastructure plan, cities would allow for smaller lots and for apartment buildings with fewer than six units to be built next to a traditional house.

Current zoning laws that favor single-family homes – known as exclusionary zoning – have disproportionately hurt low-income Americans. Many of them can’t afford to buy a big lot of land, leaving them trapped in crowded neighborhoods earmarked in the past for Black and brown residents, while white families were able to move to single-family areas in the suburbs.

Biden’s proposal would award grants and tax credits to cities that change zoning laws to bolster more equitable access to affordable housing. A house with a white picket fence and a big backyard for a Fourth of July barbecue may be a staple of the American dream, but experts and local politicians say multifamily zoning is key to combating climate change, racial injustice and the nation’s growing affordable housing crisis.

I used to own a condo in Chicago that had been optimistically built in 1923 with 9 foot ceilings. Then in the Depression, everybody went broke, so this seven-room apartment was broken up into two apartments. In the 1970s, however, it was restored to one apartment and, guess what, the ceilings were still 9 feet tall.

In contrast, if it had been built as a tenement in 1923 with 7.5′ ceilings and three or four room apartments, well, that’s as good as it would ever get. You can’t raise the ceiling. It would have remained a boat anchor dragging down the neighborhood.

The bill has not been written, but the White House said it wants to see progress by Memorial Day, and to pass legislation this summer.

“The result of this sort of investment will be critical to increasing housing options for low- and moderate-income families,” Fudge said.

The push for zoning changes comes as the Biden administration continues to reverse former President Donald Trump's housing policies aimed at chipping away anti-discrimination and civil rights protections. As part of his re-election push, Trump had accused Democrats of wanting to "abolish the suburbs."

But now, with Biden’s new push for building apartment buildings for people of color in the suburbs, we can see just how wrong Trump was.

Under Biden, HUD recently submitted two fair housing rules for review, according to notices posted Tuesday by the Office of Management and Budget. One of the policies would reinstate the Affirmatively Furthering Fair Housing rule requiring cities to reverse segregation or risk losing federal funds. The other would restore "disparate impact," a decades-old legal standard that outlaws discriminatory lending and renting practices.

Federal policy was designed to protect people from discrimination when they are renting or buying a home, but regulating land use and zoning is largely a function of local government. Biden’s infrastructure plan could significantly increase local budgets decimated during the COVID-19 economic recession – an attractive proposal for some mayors who already support affordable housing policies but want cash to cover the cost of these projects.

The Not So Great Reset.

Newark is 12 miles from Wall Street. Its mayor, the son of 1960s black radical poet Leroi Jones, is intent on making sure that the descendants of Philip Roth Era Newark don’t gentrify the place.

They argue that increased density would strain existing infrastructure such as schools, transportation, stormwater and public safety services.

“A legitimate reason for regulating density is to assure that the density of the residential environment is appropriate for the existing public infrastructure,” urban planners Gerritt Knapp and Nicholas Finio, of the University of Maryland, College Park, wrote in the Journal of the American Planning Association.

A legitimate reason for regulating density is to avoid externalities.

Environmental scientists and advocates have also welcomed Biden’s proposal, saying that zoning changes and increased density in cities has the potential to mitigate climate impact for low-income residents and those of color.

Many people of color were shut out from homeownership during decades of systemic redlining practices, where financial institutions limited mortgage loans and housing insurance to residents in specific geographic areas.

One study in Climate, an academic journal, found once-redlined neighborhoods in 108 cities experienced higher daily temperatures compared to nonredlined areas – in some cases by up to 10 degrees Fahrenheit. The report showed previously redlined neighborhoods had fewer parks, trees and were closer to industrial areas, which use up more electricity.

“Though the maps may no longer have redlines on them, the patterns and boundaries they established are much harder to undo,” said Stephanie Rosendorf, a Florida-based attorney and urban policy teaching assistant at Harvard Extension School.

Black people can’t move across invisible redlines in the street that were outlawed in 1968. In contrast, national borders haven’t stopped tens of millions of Latin Americans and Asians from moving to America since then.

By the National Multifamily Housing Council’s analysis, the United States would need to add an average of 328,000 units every year by 2030 to meet the demand of a growing population. The nation has succeeded in hitting that only mark three times since 1989.

In the 1995–2015 tough-on-crime era, we haven’t seen that many rapid neighborhood tipping points like we did around 1970 in which blacks pour into a community and whites flee within months. This might be partly due to lower black population growth and better protection against crime. Instead, we more often see a steady change in which older whites don’t necessarily move out of neighborhoods into which blacks are buying, finding black homeowners to be okay neighbors, but their children move out to avoid their old neighborhood’s public schools. So the public schools tip nonwhite well before the population does.

This was the pattern in Ferguson, Missouri, in which blacks steadily increased their share of the population from 1990 to 2010 without triggering a sudden white exodus. (But eventually, affordable housing apartments for Section 8 renters, such as Michael Brown’s family, were built in Ferguson, with well-known results.)

This steady white exodus seems to have been going on in Brooklyn Center, MN, judging from Wikipedia numbers:

Of course, as the examples of Ferguson and Brooklyn Center show, this slower process can still wind up being catastrophic for property values.

If you want integration of neighborhoods, you need tough law and order. The exact opposite thing to do is to announce a Racial Reckoning in which blacks are encouraged to riot and steal and shoot and then declare you are going to integrate the suburbs.