Black Lives Matter Norfolk, VA Edition: Since 1989, Almost Every Homicide In The Majority White City Has A Black Suspect

When you realize how much of the horror of violent crime/homicide/non-fatal shootings has been committed by blacks, you can’t look away from the horror of what proponents of Civil Rights/Equity/Social Justice have done to America. 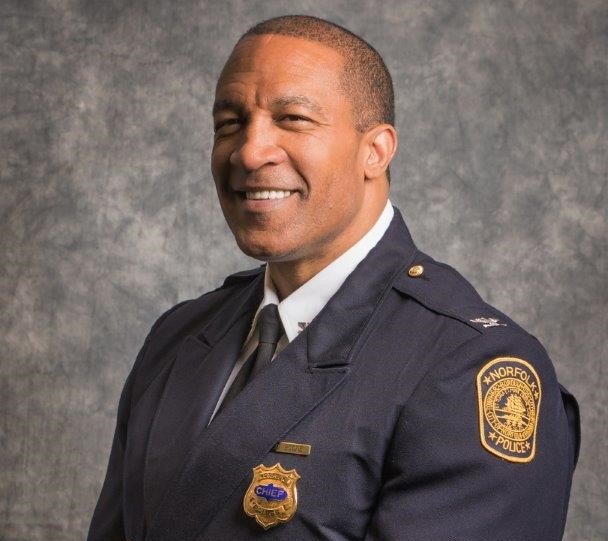 NORFOLK, Va. – Norfolk Chief of Police Larry Boone [pictured right] discussed the impact of illegal guns in the community during a 1 p.m. press conference on Friday.

Boone was joined by Charlie Patterson, the special agent in charge of the Washington Field Division of the Bureau of Alcohol, Tobacco and Firearms.

The Norfolk Police Department told News 3 that over the past year, the department has focused on certain “hot spot” neighborhoods to recover stolen guns. According to police, in 2020, Norfolk had the highest number of guns recovered out of all cities in Hampton Roads.

Boone spoke about how the neighborhoods where the guns were recovered have been mired in poverty and marginalized for many years.

Some of the statistics given out at the press conference were eye-opening. In 2021, 821 guns were recovered, and 116 of those were from felons. Boone says it often starts with women buying guns for their boyfriends who are gang members.

Chief Boone said, “If we want immediate impact, we have to stop the flow of illegal guns.”

“We we are aware Black and brown communities are critically impacted by gun violence and are committed to doing something about it,” said Boone

He also revealed how the department will partner with numerous agencies to stop gun violence and sales of illegal guns, as well as protect youth from gun violence.

As far as solutions, Boone says it starts with you – being bold and speaking up if you see something.

So from 1989 to 2021, 86 percent of homicide victims were black in Norfolk, Virginia. Since 1989, Norfolk has been a majority white city. Knowing the majority of homicides are intraracial, what percent of black suspects do you think have been behind the overall percentage of the carnage in Norfolk since 1989?

If Norfolk had no blacks, how many homicides would there have been since 1989?