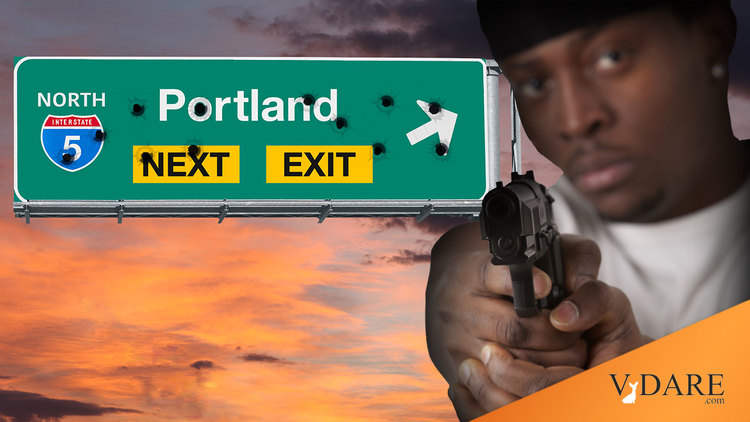 Blacks Are 8% Of The Population Of Multnomah County (Portland, OR), 40% Of Suspects In Gun Crimes

Talk about burying the lede.

PORTLAND, Ore. — The survival rules posted by gang outreach worker Lionel Irving Jr. on Facebook starkly spell out the danger for people most at risk of dying in Portland’s daunting surge of gun violence this year:

1. Don’t sit in cars kicking it. 2. Get EVERYTHING you need and get to your destination. 3. Keep your eyes and ears open! Watch your surroundings instead of running your mouth. 4. Know who you’re hanging with and what they’re up to. 5. Google numbers, order your food ahead of time, don’t sit in local spots.

Irving’s advice reflects a pervasive unease that has settled over Portland this year as the city continues on a pace — now 68 killings — to surpass the most violent year in its modern history — 1987, when 70 people were killed.

The victims since January range from an infant who allegedly died at the hands of his father to a 77-year-old woman killed in a hit-and-run rampage.

But a stunning pattern of sudden, sometimes indiscriminate shootings sets this wave apart. Guns have accounted for three-quarters of the homicides, according to an analysis by The Oregonian/OregonLive.

Fatal shootings in almost all sections of the city have followed fistfights, social media disputes, and drug deals gone bad. People sitting in cars, relaxing after work with friends in a bar, attending house parties or walking in a park have been shot dead.

Forensic analysis of spent bullet casings from crime scenes reveals connections between many of the shootings, pointing to gangs and retaliation as frequent drivers of the gun violence, investigators say.

The boldness of the shooters — marked by scores of bullets often fired at a single scene — hasn’t let up since an alarming spike first seen last year as the coronavirus pandemic took hold. In five of the shootings, two or more people have been killed.

The violence has disproportionately affected people of color — more than half of those who have been killed are Black, Latino or Asian.

The toll has been greatest among Portland’s Black residents. Black homicide victims outnumber all other victims of color by far and are nearly as numerous as white victims in the overwhelmingly white city.

The homicide rate for Black people this year is nearly eight times higher than for white people, based on their population in Portland. More than three-fourths of Black homicide victims were men in their 20s, 30s and 40s and all but two of them died in shootings.

As with other U.S. cities experiencing escalating gun violence, Portland faces fallout from easy access to guns, coronavirus-shuttered safety nets like after-school programs, and a distrust of police following last year’s killing of George Floyd by a Minneapolis police officer.

Mayor Ted Wheeler has called the shootings an epidemic. City Councilor Mingus Mapps, who is Black, characterized the gun violence as a “cancer in our city.”

Yet the shootings have defied police, political and community attempts to slow the bloodshed. Nothing has seemed to work: not public appeals, marches, billboards and some stepped-up gun investigations.

The elimination of a special police Gun Violence Reduction Team last year without an immediate alternative has led to a prolonged debate and has mired attempts at a strong, unified response to the violence.

‘LOOK IN THE MIRROR’

The city can’t let this year’s gun violence “become the norm,” Tony Hopson Sr. told a crowd this summer at a Unity in the Community event in a Northeast Portland park.

The longtime director of the largest Black-led nonprofit in Oregon, Self Enhancement Inc., has repeatedly called on police, Portland leaders, the city at large and his fellow Black residents to do their part to stop the shootings.

A social service network including schools and nonprofits must reach kids from an early age to keep them away from destructive behavior, Hopson told the crowd. Government agencies must better fund community-based agencies to provide after-school programs, internships and job opportunities for young people, he said.

Schools must “find more people that look like us” to work with young students “so they don’t end up getting pushed out of school,” Hopson said.

Lastly, he said, Black people must look in the mirror.

Statistics for the last three years in Multnomah County show Black people were overrepresented as both victims and defendants in gun cases handled by the District Attorney’s Office: 24% as victims and 39% as defendants. Black people or people identifying as Black in combination with another race make up 8% of the county’s population, according to the most recent census data.

Lakayana Drury, executive director of the nonprofit Word is Bond, last spring drafted his own plan to address the spike in shootings. Drury’s group strives to improve relations between young Black men and police.

He wants to identify potential shooters and those involved in petty crimes or gangs from ages 16 to 30, then support them with a monthly $1,000 stipend for two years. They would have to get job training for a trade, mentoring and mental health support during that time.

Dondrae “Choo” Fair, a former gang member who mentors others, said he got a call in mid-August that one of the young men he had been working with had been shot. He drove to Legacy Emanuel Medical Center and learned it was JaMarie Herring, who died after being shot at Mingle Lounge.

Fair had known Herring since he was a boy but about five years ago, Herring’s name came across his desk when Fair was a counselor for Volunteers of America. Herring had been placed on probation for criminal mischief and possessing a gun as a felon.

Herring loved to write so Fair encouraged him to draft his goals. Herring started to write rap music and make videos. He went by the monikers Big Greaze or Greezy.

“I don’t think police can stop this problem,” Fair said. “It’s going to take Black people who have been in this life that want to do something to help the people get out of this lifestyle.

“We can’t tell people to stop doing things without a plan,” he said. “We need to help young people learn skills, learn some trades and find opportunities.”

In the county where Portland is located, only eight percent of the residents are black. Yet over the past three years, 39 percent of those charged in gun cases are black.

Seriously, let’s go back to how the Second Amendment was once intended to be: only covering the right for white men to own firearms. This will surely stop the gun violence crisis across America, particularly in Portland, where 39 percent of defendants in gun crime cases are black, though the county is only eight percent black.

It’s not white people gunning down innocent black bodies, either.

And what’s the clearance rate for homicide and nonfatal shootings in the county? How many shootings and murders go unsolved?

Make it illegal for blacks to own firearms and vigorously prosecute any black individual possessing a firearm, and in less than a year you will see homicides fall by 50 percent in not just Portland, but all across America. Same with nonfatal shootings.