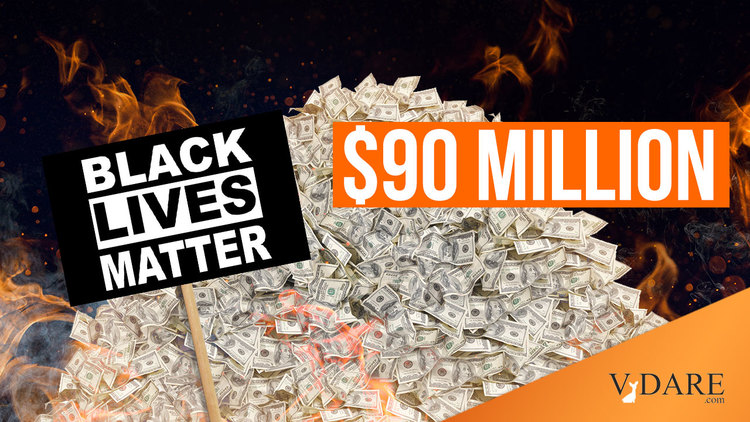 Unlike, say, the SPLC or ADL, who, ya gotta admit, at least work hard for their lucre, the main Black Lives Matter organization doesn’t actually do much other than, I gather, own the intellectual property right to the phrase “black lives matter” (do they?) and collect Danegeld from frightened corporations. From the New York Post:

The Black Lives Matter foundation has revealed it received more than $90 million in donations last year — despite the movement being splintered by ongoing feuds about the lack of funding.

With $8.4 million in expenses and $21.7 million committed to local chapters, the group ended 2020 with “an approximate balance of $60 million,” it stated in an impact statement.

“We are no longer a small, scrappy movement. We are an institution,” the foundation boasted.

“We are entering spaces previously unimaginable.”

The financial disclosure came amid heightened tensions in the network of activists — with group of 10 chapters, called the #BLM10 and including ones in New Jersey and Hudson Valley, splitting in November while publicly ripping the main organization over “financial transparency, decision making, and accountability.”

“To the best of our knowledge, most chapters have received little to no financial support from BLMGN since the launch in 2013,” the 10-chapters insisted in a public demand for “accountability.”

That lack of funding came despite BLM getting donations from A-list celebrities such as Beyoncé, Jay-Z and — prior to his death in 2016 — Prince, The Associated Press noted.

BLM co-founder Patrisse Cullors — the foundation’s executive director — insisted that the financial boost in 2020 was radically different than previous years, however, without releasing further records.