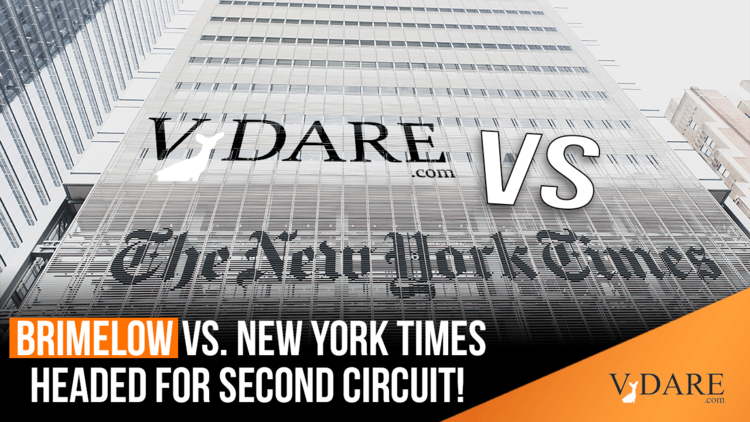 The Southern District of New York, in a decision which avoids most of our arguments, has dismissed [PDF] Peter Brimelow's libel complaint against the New York Times.  As the court did not grant oral argument, the result is not wholly surprising.  Interestingly, Judge Katherine Polk Failla found that smear in the original January 15, 2019 article (i.e. that Brimelow was an "open white nationalist") was a factual allegation—and thus potentially libelous.   Amazingly, however, the good judge then found saving grace in the "stealth edit," which allegedly provided "context."  The opinion nowhere addresses the ethical breaches evidenced by the stealth edit, or the New York Times' staunch refusal to honor its own stated journalistic code.  These are only some of the court's omissions.

One of the more interesting arguments submitted on behalf of Brimelow was that libel actions could actually serve the alleged purposes of the First Amendment by holding irresponsible parties to account, particularly where the libels were deployed to police and enforce the bounds of "permissible discussion."  As readers of VDARE.com know, that policing action narrows debate; it does not conduce to "uninhibited robust and wide open debate."  The New York Times did not respond to this argument.  Neither did Judge Failla.

We will appeal, and expect better jurisprudence from the Second Circuit.

As a veteran of some 40 years in national Main Stream Media (Wall Street Journal, Barron's, Fortune, Forbes), it does strike me as extraordinary that the New York Times, having conceded that it was wrong to call me an "open white nationalist" by stealth-editing its website, will not simply acknowledge this correction in print, despite making such acknowledgements a point of honor in its published code of conduct.

All The News That's Fit To Woke?

Like Supreme Court Justice Clarence Thomas, I don't see how the Sullivan ruling is a sustainable standard in public discourse—especially given the current hypocritical Ruling Class harrumphing about "disinformation."

I don't know if I and VDARE.com will make this breakthrough. But someone will.

Needless to say, this brutal struggle is expensive and I would be profoundly grateful to readers who can help us now.