In his talk with James Edwards, Peter Brimelow, responding to the idea that any pro-American thing said by Trump was White Nationalist, said "Sometime soon I’m going to write an article on what a White Nationalist State of the Union would really look like. It would go a lot further than Trump!". 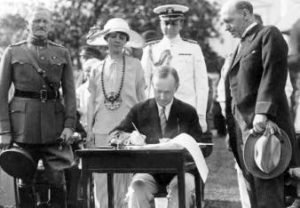 We might take as an example Calvin Coolidge's 1924 SOTU. [Second Annual Message, December 3, 1924] Coolidge, of course, was the farthest thing from an explicit white nationalist—he was a New England Republican, and would have said he was an American.

He's also the man who signed the Immigration Act Of 1924, which took 30 years of patriotic immigration reform activism to get passed. Here's what he said about that in his State Of The Union:

Two very important policies have been adopted by this country which, while extending their benefits also in other directions, have been of the utmost importance to the wage earners. One of these is the protective tariff, which enables our people to live according to a better standard and receive a better rate of compensation than any people, any time, anywhere on earth, ever enjoyed. This saves the American market for the products of the American workmen.

The other is a policy of more recent origin and seeks to shield our wage earners from the disastrous competition of a great influx of foreign peoples. This has been done by the restrictive immigration law. This saves the American job for the American workmen. I should like to see the administrative features of this law rendered a little more humane for the purpose of permitting those already here a greater latitude in securing admission of members of their own families.

But I believe this law in principle is necessary and sound, and destined to increase greatly the public welfare. We must maintain our own economic position, we must defend our own national integrity.

It is gratifying to report that the progress of industry, the enormous increase in individual productivity through labor-saving devices, and the high rate of wages have all combined to furnish our people in general with such an abundance not only of the necessaries but of the conveniences of life that we are by a natural evolution solving our problems of economic and social justice.

These developments have brought about a very remarkable improvement in the condition of the negro race. Gradually, but surely, with the almost universal sympathy of those among whom they live, the colored people are working out their own destiny.

You'll notice that Coolidge is linking improvements in the condition of black Americans (he says Negro because that was the polite way of saying it at the time) to immigration restriction—just as VDARE.com editor  Peter Brimelow did in National Review in 1996...and Trump did in the State Of The Union in 2018.