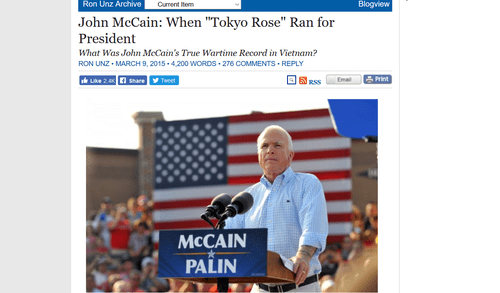 Can It NOW Be Asked? Was POW McCain A "Hanoi Rose"? Among Other Things

Ron Unz has republished his series on Senator McCain's conduct (or rather, misconduct) as a prisoner of the North Vietnamese, and his failures (or coverups) on the issue of unreturned Vietnam POWs on Unz.com, some of which was published in the American Conservative:

We mentioned some of these issues duriing the 2016 campaign, in which McCain attacked Trump (and America, as usual) and Trump fought back. See Is Donald Trump Surfacing The Long-Rumored HateFact That John McCain Was Not A Hero, But A Collaborator? by Peter Brimelow, Senator "Tokyo Rose" McCain Outed By Donald Trump? by Patrick Cleburne, and If Trump Resurfaces McCain Vietnam Allegations, Will McCain Finally Lose His Senate Seat?  by me.

Earlier, Unz had published this on VDARE.com in 2010:Might MIA Issue FINALLY Finish McCain In Arizona?

Some of these allegation had been known for years, and Peter Brimelow published them here during McCain's 2008 campaign for President, noting

Surprisingly widespread resigned acceptance among Beltway Republicans that McCain’s much-touted POW record will boomerang, just like John Kerry’s Swift Boat service, because of allegations, widespread on the internet, that he eventually collaborated with his captors. I don’t know what the truth is. But I do know that, nearly twenty years ago, William Stevenson, author of the huge spy best-seller A Man Called Intrepid,  and his co-author and wife Monika Jensen, were privately expressing puzzlement at finding in their research for their Kiss the Boys Goodbye: The Shocking Story of Abandoned U.S. Prisoners of War in Vietnam, that McCain had emerged as an opponent of efforts to solve the MIA conundrum.