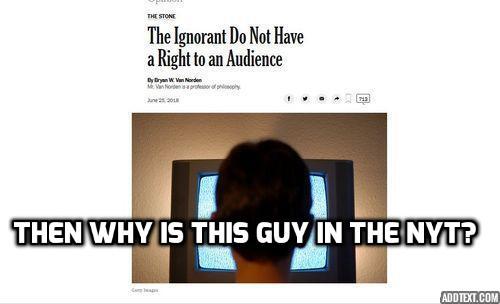 Steve Sailer blogged below on an Op-Ed that appeared in the Establishment's "Newspaper of Record". [NYT: Why Should Stupid People Like Ann Coulter, Jordan Peterson, and Charles Murray Have as Much Freedom of Speech as a Smart Person Like Ta-Nehisi Coates?] 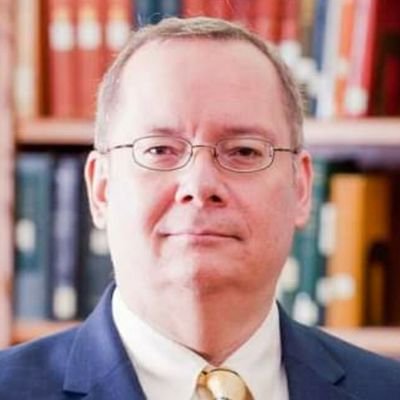 I missed the part about where Bryan W. Van Norden (right) was a "professor of philosophy"—Wuhan University, in China.

“THE IGNORANT DO NOT HAVE THE RIGHT TO AN AUDIENCE:” It’s possible that this op-ed by philosophy professor Bryan W. Van Norden in today’s New York Times is a parody. If it’s not, we have to assume that he thinks Herbert Marcuse’s infamous essay “Repressive Tolerance” represents a credible authority to which to appeal when discussing free speech, that readers won’t notice that he assumes his own totally unwarranted infallibility while criticizing J.S. Mill for pointing out the problems in doing just that, and that as “a professor of philosophy at Wuhan University” and therefore an employee of the Chinese Communist government, he and those like him would certainly be among those most likely to be denied a platform if the U.S. government had the power to do so.

Depends on the U.S. government—neither Obama nor Clinton would ever do anything to deplatform a pro-Communist. (In fact, if we had effective public  shaming of  pro-Communists the way we have of so-called "racists", neither man would ever have been elected.)
But I just want to get to one thing in Van Norden's piece:

Similarly, the top colleges and universities that invite Charles Murray to share his junk science defenses of innate racial differences in intelligence (including Columbia and New York University) are not promoting fair and balanced discourse. For these prestigious institutions to deny Murray an audience would be for them to exercise their fiduciary responsibility as the gatekeepers of rational discourse. 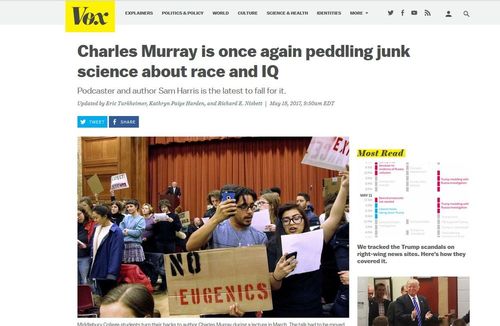 First of all, Charles Murray is not speaking about racial differences in IQ at college campuses. We wish he would, and he might as well—student haters show up and riot anyhow. See Alexander Hart's Memo To Charles Murray: Defend THE BELL CURVE—Or Stay Off The College $peaking Circuit!
What the piece Van Norden linked to above was a  complaint that Murray was being allowed to defend the science of racial differences on a podcast—Vox illustrated it with  a picture of students who were rioting because they will do that to anyone who has ever talked about racial differences in IQ.
As for Van Norden's following the headline writer's claim that Murray is  talking "junk science", I'd like to point out that the three authors of the Voxsplainer (three real professors, not the usual Vox intern) can't agree among themselves about the extent to which racial differences in IQ are junk science. Steve Sailer quoted Eric Turkheimer as saying

In fact, I will close by noting that not even the three of us are completely in agreement about it: I (Turkheimer) am convinced that the question is irredeemably unscientific; Nisbett accepts it as a legitimate scientific question, and thinks evidence points fairly strongly in the direction of the black-white gap being entirely environmental in origin; while Harden questions the quality of the existing evidence, but thinks more determinative data may be found in future genetic knowledge.

In spite of this reasonableness, you could say that there is consensus on American campuses—not among actual IQ scientists, but among the staff and student rioter class—that mentioning IQ differences is BadThink, and must be put down by force if necessary.
What Professor Van Norden may not know is that no such consensus exists in Communist China, where people are traditionally racist against all foreigners—including blacks, and where, for example, they don't see a problem with studying eugenics and IQ.
See my "Ethical Worries," IQ, And Diversity,  and China pushing the envelope on science, and sometimes ethics, By John Pomfret, Washington Post, June 28, 2010.