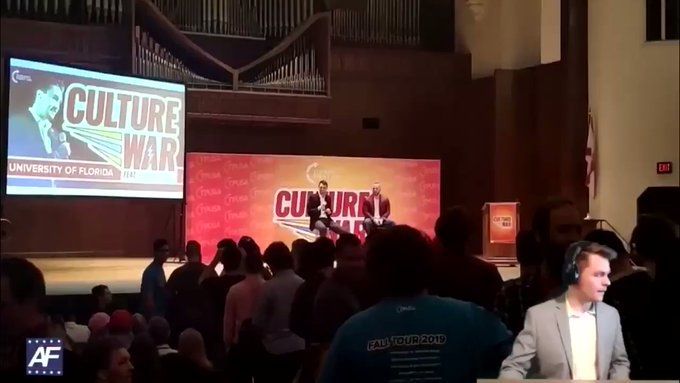 Kirk’s college tour has been derailed by tough questions from fans of “America First” host Nick Fuentes. Tuesday night was no different, but Charlie struck a different tone from before.

He appeared to recant his support for stapling green cards to the college diplomas of foreign graduates. He expressed support for the RAISE Act. He also said that immigration is one of the most important issues facing America.

It sounded good on the surface, but the patriotic crowd wasn’t having it. One young engineering student demanded to know why Kirk supports replacing tech workers with Indians. Kirk did not like the question.

Charlie Kirk confronted YET AGAIN on how non-white people vote overwhelmingly for democrats. Tried to bring up cuban support but gets boo’d by the crowd since hispanics at large overwhelmingly vote democrat! pic.twitter.com/BSo2FSs4q3

While pursuing a fairly restrictionist line at UF, he condemned “white identitarianism” as evil. That denunciation drew a cacophony of boos.

Kirk is clearly feeling the heat from the Groyper War and is trying to backtrack from his immigration boosterism to assuage the high-energy nationalists. He has settled on a strategy of appealing to America First immigration priorities while condemning any hint of white identity. It’s an interesting strategy, but it’s not working on the groypers.