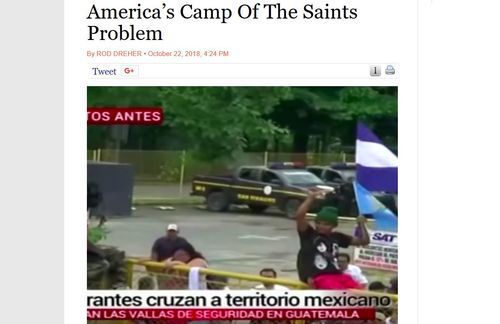 Commenters At THE AMERICAN CONSERVATIVE Mull Solutions To "The Caravan"

In a current piece at The American Conservative, "crunchy-conservative" columnist Rod Dreher explores the obvious common theme between Jean Raspail's 1973 novel, The Camp of the Saints (a familiar subject here at VDARE.com), and the Central American "caravan" steering toward America's southwest border. In doing so, he tiptoes up to some ultimate questions:

[A]t what point will a European navy open fire on a boat carrying migrants? If that happens, how will the European public react? If that action is unthinkable, doesn’t that give a tremendous advantage to migrants?

The raw logic of Raspail’s novel says that the only way to defend Western civilization from these invaders is to be willing to shed their blood. In the novel, only a few Westerners are willing to do that, and they fail. The rest collapse, spiritually and morally exhausted.

The book is a kind of alt-right pornography, and I found it frequently repulsive to read. Yet looking at that migrant caravan heading north, that “numberless disinherited people of the South” who like a tidal wave, are marching north toward our fortunate country’s wide-gaping frontier—it’s impossible not to think about Raspail’s ugly prophetic work.

How far, ultimately, are the United States and Europe willing to go to control their own borders in the face of people who believe they have nothing to lose by trying to cross the frontier? And: at what point do most of us cease to believe that we have anything worth defending—and a majority of us come to believe that those numberless disinherited people from the South are “a kind of solution”  to our terminal malaise?

As I write this, about 40 commenters have weighed in. Some are looking for ways to avoid that blood. Here's "Polichinello":

How far, ultimately, are the United States and Europe willing to go to control their own borders in the face of people who believe they have nothing to lose by trying to cross the frontier?

If you look at the people in the picture, they’re anything but emaciated. Scoop them up, put on the zip ties, load them onto C-17’s and dump them back in Tegulcigalpa. [sic; Tegucigalpa, the capital of Honduras] Repeat as long as necessary. They’ll get tired of the hassle and give up. They want to appeal. Fine, do it from there.

But the most important thing is to stick to it. Trump’s biggest failure was caving in on the separation issue. He was in the right then, and he should have stuck to his position. The Left’s caterwauling would have eventually faded once the next crisis showed up, and another always does.

We’re in a deep mess which goes back before Trump to the first cursed Bush and even Reagan, who began the wretched policy of handing out amnesty for pretend enforcement, and it’ll take time and resolve to stabilize things again.

For those who want to clear their throat and mewl about Constitutionality, if we can’t prevent a mass of people from crossing our borders illegally, then we don’t have a country, and the Constitution is nothing more than antique scrap of paper. Don’t think this lawless will end with immigration. This rot will go much, much further.

The only solution short of being willing to use lethal violence IMO is the make migration an exercise in futility. You must impose a zero tolerance policy. No more asylum, no more refugee status. Anyone arriving irregularly will be immediately turned away and deported, no questions asked. Turn the border into a fortress if you have to. Implement e-verify and crack down on employers. Make life untenable for someone here illegally, and deport every single illegal alien you can find. Strike deals with governments to force them to take back their citizens, and detain anyone who won’t say where they’re from indefinitely, or find countries you can bribe to take them. You cannot relent, you cannot have sympathy, you cannot make exceptions, or every migrant will become an exception. That’s what’s going on now with their blatant abuse of our asylum statutes. They know that in most cases that it’s their only chance at being legally allowed to stay, so now *every* migrant is a refugee from something, which of course completely defeats the purpose of the designation. Any loophole, any humanitarian consideration you make, will be exploited ruthlessly and shamelessly by people desperate to leave their home countries. You literally cannot have a heart. Any weakness will compromise the entire system. Migrants must come to believe that they can never succeed, or they will continue to try.

Others think any actual solution must, indeed, come to blood. Commenter "Chr":

This is just silly. Of course we could control the border–if we wanted to. I’m certainly not the only one who has suggested we landmine, say, from the border back 1/2 mile into the U.S. Then just sit back.

Wouldn’t take much to stop the hordes as a few of them blow up. And wouldn’t take any positive action. Oh, put up lots of signs of warning. As many as you want.

Think that’s drastic? As I keep trying to explain to people, the one valuable inheritance of my grandchildren is the rule of law and their citizenship. They are being stripped of that. Am I supposed to sit back and do nothing? My forefathers (and foremothers on the homefront) fought and died for what people today are throwing away–and they don’t own it.

But, as some of us learned in Harvard Law School, despite what the profs were trying to teach us, you own what you control. Law means nothing without violence, because push ALWAYS comes to shove.

You could look it up.

Well, if we started shooting them, I suspect they would stop coming.

Go back to something C.L.H. Daniels wrote: "You literally cannot have a heart." Raspail himself had made that point in the preface to the third edition (1995) of his novel:

I am a novelist. I have no theory, no system nor ideology to propose or defend. It just seems to me that we are facing a unique alternative: either learn the resigned courage of being poor or find again the inflexible courage to be rich. In both cases, so-called Christian charity will prove itself powerless. The times will be cruel.

And commenter "Raskolnik" would choose "the inflexible courage to be rich":

How far, ultimately, are the United States and Europe willing to go to control their own borders in the face of people who believe they have nothing to lose by trying to cross the frontier?

They only think they have “nothing to lose” because they believe that their life will not be put in danger by the attempt, and it is well past time to disabuse them of that notion.

If they succeed, that’s the end of our civilization. That “women and children” comprise some of the current invading force is completely beside the point; the children grow up and the women will birth fighting age men.

But then, there's also this, from commenter "Chris":

Counterpoint which I have yet to see convincingly refuted from a Christian perspective:

The benefits of bringing in poor people from third world countries, to those people (better standard of living, better life, the opportunity to be exposed to Christianity) is a greater moral good than preserving western culture.