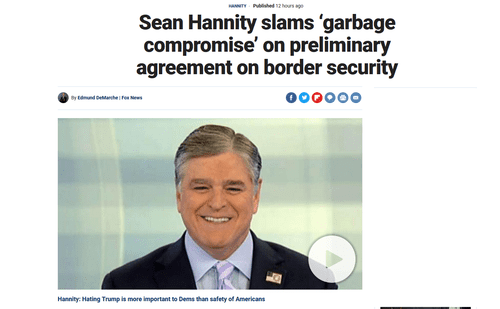 Congress’s Terrible Wall Deal Must Be Rejected By Trump

Congress announced Monday night it had reached an agreement on a budget deal--and it included little for the wall and restricts President Trump’s power to enforce immigration law.

The deal would include only $1.375 billion for “physical barriers” on 55 miles of the U.S.-Mexico border. This falls far short of Trump’s requested $5.7 billion. Additionally, the “compromise” would cap the number of beds in immigration detention facilities to 40,520--a 17 percent reduction from the current cap. [Negotiators reach deal ‘in principle’ to avert shutdown, by Sarah Ferris, Heather Caygle and Burgess Everett, Politico, February 2, 2019]

That stipulation would effectively force the administration to bring back catch-and-release.

The supposed compromise is essentially the same offer put forth to Trump before the partial government shutdown in December. The only real difference is the reduced cap on beds in Immigration and Customs Enforcement detention facilities.

It’s a bad deal, and it didn’t please conservatives. Most importantly, Fox News host Sean Hannity lashed out at the deal on his show Monday night. “$1.3 billion? That’s not even a wall, a barrier… We will get back into this tomorrow. Any Republican that supports this garbage compromise, you will have to explain—look at this crowd, look at the country,” Hannity said as Trump took the stage for his rally in El Paso, Texas. [Sean Hannity slams ‘garbage compromise’ on preliminary agreement on border security, by Edmund DeMarche, Fox News, February 11, 2019]

Hannity is a reliable indicator of Trump’s thinking due to his close relationship with the President. He rarely criticizes Trump and nearly always lines up with the administration. If he doesn’t like the deal, then there is a good chance the President doesn’t like it either.

The upside to this deal is that no grand amnesty is being considered by Congress. Reports last month indicated Jared Kushner was trying to offer green cards for Dreamers in exchange for $5.7 billion for the wall. [A "go big" idea to end the shutdown, by Jonathan Swan, Axios, January 23, 2019] Congress’ compromise shows that that offer is not on the table, giving immigration patriots one bit of news to cheer about.

That doesn’t justify the horror of the present compromise, however. The Watcher has previously said that Trump’s best move is to sign a budget deal that gives a nominal amount for the wall and then declare a national emergency to obtain more money for border security. He is not going to build the wall through Congress, as the latest plan shows.

That said, Trump and Republicans need to ensure that the budget deal they do agree to does not restrain the administration’s ability to enforce the immigration law. The cap on ICE facility beds does that and it must be scrapped.

Trump will likely signal his disapproval for the plan and send it back to the negotiating table. Republicans should insist on no limits to immigration enforcement and take the current funding pledge for border security.

After it is signed, Trump must reapportion to Defense Department money to the wall. Whether that is by declaring a national emergency or another way, this is the President’s only option for building the wall.

No one is fooled by his new slogan “Finish the Wall.” It’s not even close to completion  He needs to do something outside of Congress to get the job done.