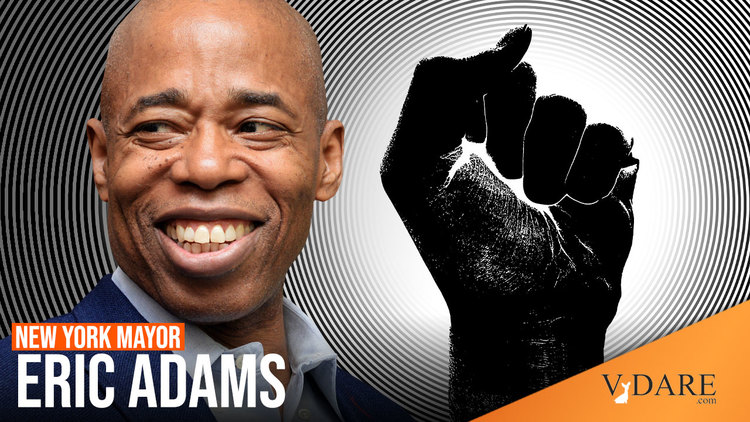 “Crackers!” Recording Of Black Supremacist Mayor Eric Adams Saying The Equivalent Of “N[censorware]r!” Is Released, But Has No Impact

Earlier: SALON’s Joan Walsh Thinks That There Is "No Social Order” Where Blacks Oppress Whites. She’s Wrong, Of Course

Rudy Giuliani resuscitated Gotham from 1994-2002, and Michael Bloomberg maintained the corpse from 2002-2014, but it looks like communist kleptocrat Warren Wilhelm/Bill de Blasio and new Nation of Islam Mayor Eric Adams have finished the job.

It’s like an old episode from Tales from the Darkside. Grandpa (Eddie Bracken) refuses to believe that he’s died, until a few days later, when his rotting nose falls off.

Mayor Eric Adams apologized Friday after an old clip resurfaced where the mayor was recorded saying he was a superior cop compared to his “cracker” colleagues during his time in the New York City Police Department.

“Every day in the police department, I kicked those crackers’ ass,“ now-mayor Adams says in the video at a private Harlem Business Alliance event in 2019.

[A white mayor who spoke that way about blacks would immediately be driven from office.]

“Man, I was unbelievable in the police department with 100 Blacks in Law Enforcement,“ Adams, who retired as a captain in the NYPD, says in the video referencing the group he co-founded.

“[I] became a sergeant, a lieutenant and a captain. You know the story, some people all of a sudden trying to reinvent me, but the reality is what I was then is who I am now.“ [Indeed]

“I’m called again,” Adams continues in the nearly minute-and-a-half clip talking about his expected run for mayor, joking that he’d rather “grow a beard, smoke some weed and leave this stuff alone.”

“You hear me? These negroes that wake every day and don’t like themselves, they are going to beat me up. The people who say, ‘Where’s our real Black leaders?’ They’re going to say, ‘Who’s Eric? Why does Eric think he should be mayor?’ Well, negro, you run, you run. Go raise the $7 million dollars.”

Adams apologizes for video boasting about being a better cop than ‘cracker’ colleagues, by Craig McCarthy, New York Post, February 4, 2022] 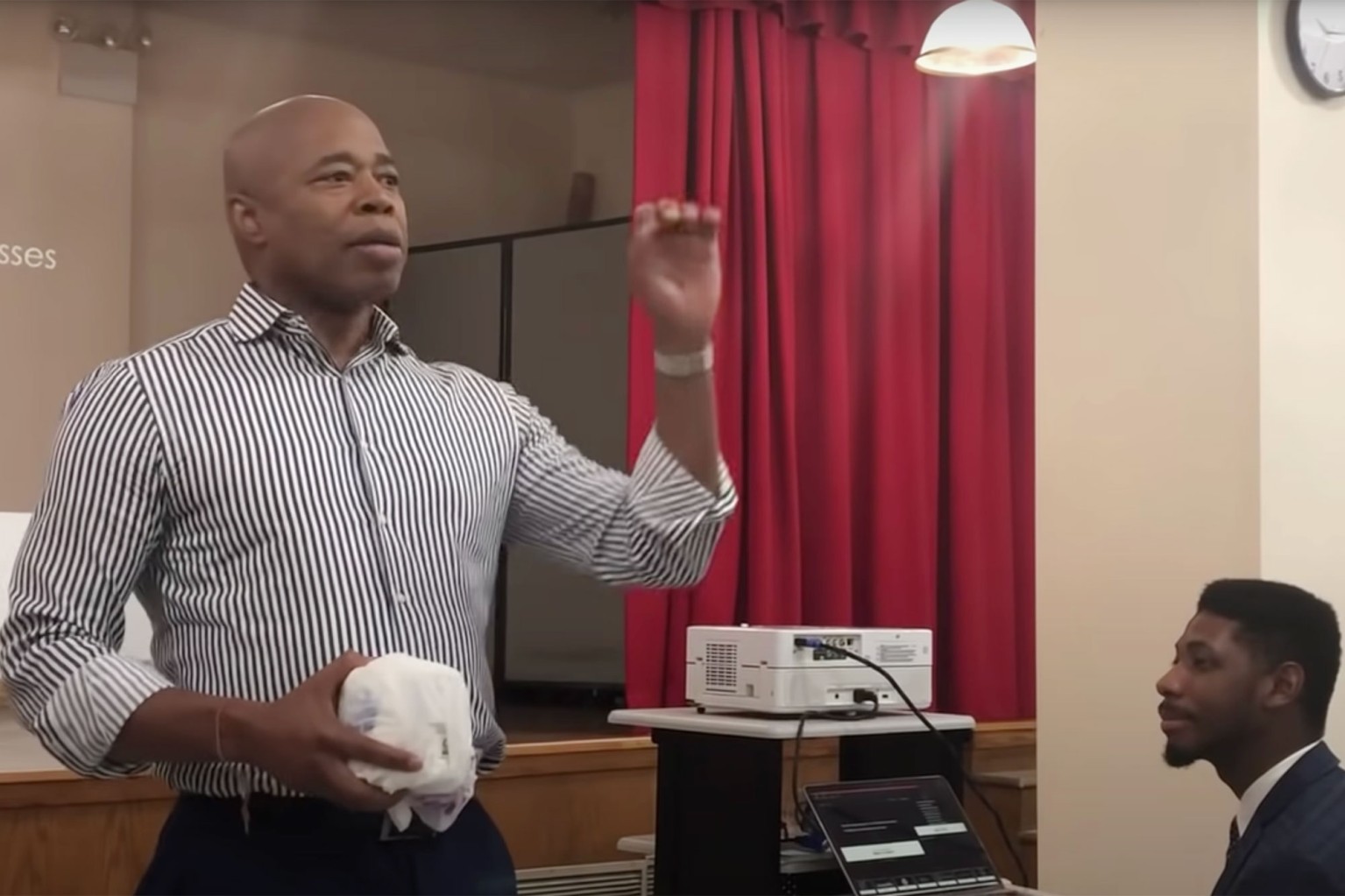 According to Adams, Daughtry recruited him as a young man to “infiltrate” the NYPD, which would entail a criminal conspiracy [The Rise of Eric Adams and Black New York, by Mara Gay, NYT, December 22, 2021]. In 1978, I saw Daughtry speak at my undergraduate school, SUNY Stony Brook, where he said of the Lubavitcher Chassidim of Crown Heights, Brooklyn, “I want to see what happens when men meet men.”

That was fancy talk for wanting to lynch Jews.

Daughtry got his wish on August 19, 1991, when a mob of his followers lynched Australian rabbinical student Yankel Rosenbaum, 29, while screaming, “Kill the Jew!” The killer was black Lemrick Nelson Jr., whom liberal judges and black supremacist jurors aided and abetted.

Louis Farrakhan has controlled the black supremacist murder cult, the Nation of Islam, for over 50 years, going back to when its nominal leader was the fading Elijah Muhammad (1897-1975), through Farrakhan’s control of the NOI’s assassin squads, including the Fruit of Islam (FOI) and the Death Angels. In April 1972, Farrakhan’s FOI murdered white NYPD patrolman Philip Cardillo with Cardillo’s own service weapon, in an ambush attack in Farrakhan’s mosque, set up by a false “officer in need of assistance” call from within the mosque.

As I wrote last June,

Adams’ NYPD career was marked by a series of acts which, had he been white, would have constituted misconduct, conspiracy to obstruct justice, conspiracy to interfere with governmental administration, and brought about his dismissal and prosecution, while others would have made him a laughing-stock. He also had a history, while a policeman, of supporting black criminals. In fact, his career as a policeman consisted largely of aiding and abetting black criminals, and racially terrorizing white policemen.

Instead of reviewing the career that made Eric Adams the black supremacist cop from hell, the New York media developed a case of amnesia, and became his biggest backers, especially the purportedly conservative New York Post, acting as if Adams’ police career were an advantage in fighting out-of-control, black crime.

Longtime neoconservative Post publisher Rupert Murdoch handed over control of his media empire to his liberal son, Lachlan, several years ago. The father now acts only in an advisory capacity, and the son routinely ignores his advice.

During the same period, Adams sought unsuccessfully to extort favors out of the NYPD brass to give promotions to his black supremacist gang buddies.

On January 24, 2004, when white NYPD Officer Richard Neri, doing stairwell and roof patrol duty in Brooklyn’s Louis Armstrong Houses housing project was surprised by young black man Timothy Stansbury Jr., 19, suddenly illegally coming through the roof door, Officer Neri shot Stansbury dead. Although the cop had followed Department guidelines to the letter, Adams publicly condemned him, saying he had no business being a policeman, and thereby sought to incite hatred and violence against the man, based solely on the color of his skin (dismissal-worthy).

After Adams had cashed a paycheck at white and Asian taxpayers’ expense for over 20 years, NYPD Commissioner Ray Kelly finally told him to hit the road, after Adams had criminally revealed at which subway stations cops were searching for weapons. Adams asserted (paraphrased), "They didn’t fire me, I quit."

The head of the Police Benevolent Association cut the mayor some slack, saying in a statement, "Whenever a controversial video of a police officer surfaces online, we ask for fairness instead of a rush to outrage.”

“We will apply the same standard here,” PBA President Pat Lynch said. "We have spoken with Mayor Adams about this video.

“A few seconds of video will not define our relationship.”

Detectives Endowment Association President Paul DiGiacomo echoed the sentiment, saying, "Something seen in a short video on social media should not be used to judge an incident in its entirety.

“Actions on the other hand speak volumes — and we’ve seen that in the Mayor’s support over the past weeks," he said. “Mayor Adams has expressed his regrets. We will hold him to his word.”

I called Adams’ campaign office three times last summer, asking for him to confirm or deny that he is or ever was a member of the Nation of Islam. At one point, one of his staffers called me back, I immediately picked up, and the staffer immediately hung up on me. (My hunch is that the staffer had a “call-back list,” and just wanted to be able to check off my name.) Since Adams’ election, I also responded to one of his Tweets, repeating my question. I have never gotten a response from him, or anyone who works for him.