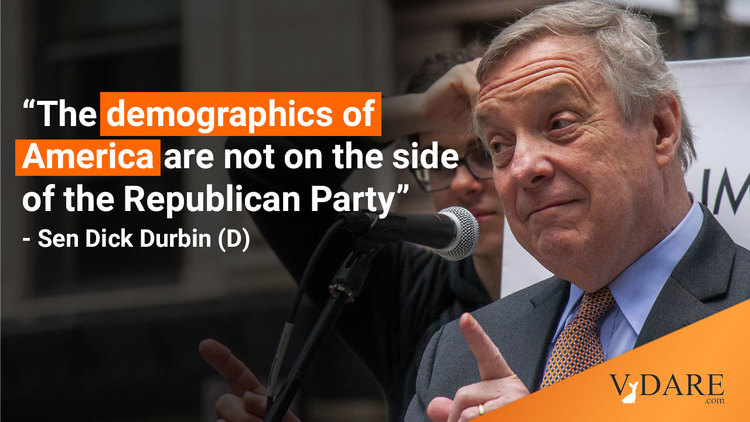 Earlier: Leftists Claim “Great Replacement” Is A “Conspiracy Theory” …Unless They’re Bragging About It

It’s not a conspiracy when the right people celebrate the disenfranchisement of White America. It’s just a fact worthy of shouting from the highest hill.

Democratic Senator Dick Durbin on Monday boasted that “the demographics of America are not on the side of the Republican Party” and predicted that an ongoing influx of “new voters” will ensure the GOP is doomed.

“The demographics of America are not on the side of the Republican Party,” Durbin said. “The new voters in this country are moving away from them, away from Donald Trump, away from their party creed that they preach.”

I thought the Great Replacement was a “conspiracy theory”?

Is this why the border has been thrown wide open to unlimited third world immigration and illegals are secretly being flown all over the country by the military?

Meanwhile, the GOP is looking for the next non-white to promote as their avatar for minority outreach, while The Great Replacement ensures the Republican opportunity for capturing state and national elections is as likely as their party winning the mayoral election in nearly 95 percent non-white Detroit.

Demographics is destiny, after all.