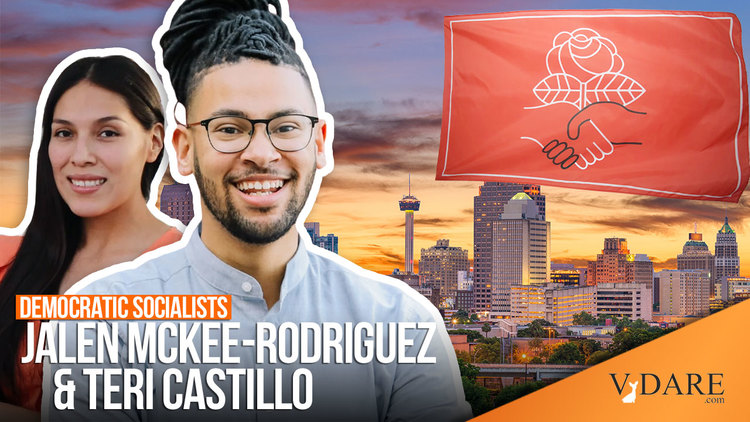 Not too long ago I wrote about the demographic shift going down in San Antonio and how it’s turning the area into a de facto Democrat ghetto. Although the city saw a slight shift towards Trump last year, which I believe was largely due to the Black Lives Matter insanity of 2020, recent runoff elections show that the city is reverting to its leftist course and then some.

In a city council race that took place on June 5, 2021, the Democratic Socialists of America (DSA) got on the scoreboard after two of their candidates, Jalen McKee-Rodriguez and Teri Castillo, came out victorious in their respective races.

The Democratic Socialists of America (DSA) celebrated the victories of Jalen McKee-Rodriguez and Teri Castillo, who won Districts 2 and 5, respectively.

“Last night our chapter made history in San Antonio by electing two DSA members to City Council,” the group wrote in a statement.

“Our members knocked over 10,000 doors between these two districts, securing a win over the bosses, developers, homophobia, ageism, the police union, and right-wing fear tactics.”

McKee-Rodriguez ousted incumbent Councilwoman Jada Andrews-Sullivan (District 2), who formerly employed him in her campaign and office. Andrews-Sullivan and Treviño were the only two incumbents to lose their seats.

Treviño lost to Mario Bravo, a project manager at the Environmental Defense Fund with some experience at the margins of the city government. Bravo was formerly chair of the CPS Energy Environmental Stakeholders Group and also served on a working group for development of San Antonio’s “Climate Action” plan.

While both Andrews-Sullivan and Treviño have built reputations as liberal members of the council, Castillo and McKee-Rodriguez cast themselves as progressive alternatives.

Both supported Proposition B, the ballot measure to strip the San Antonio Police Officers Association of collective bargaining power. Though it made no changes to the department’s budget, the proposition quickly became a political football with support falling on party lines among statewide figures like Beto O’Rourke, who supported it, and Governor Greg Abbott, who opposed it. Proposition B failed narrowly in the May 1 election.

Castillo also criticized the Ready to Work SA initiative, a successfully passed proposition to create funding for job training and tuition assistance, as needed but inadequate.

“There are few announced indications that folk are being trained in ways that will lead to long-term pay at livable wages, or even that the training is translatable to work across a variety of industries, in the event that industry targets prove to be inflated or incorrect.”

McKee-Rodriguez has made housing one of his prime issues, calling for a citywide tenants’ bill of rights that includes “a ban on discrimination based on source of income” and “a ban on consideration based on non-violent crimes.”

The new Hispanic DSA members' advocacy for “livable wages” reminds me of an observation by Thomas Sowell:

Rational economics often becomes an afterthought in the spectacle that is mass democracy. Doubly so, when minority ethnics jump into the political ring.

From my time living in Hispanic milieus and studying Hispanic political culture I’ve come to view Hispanics as mostly class reductionist in their views. This was most evident when predominantly Hispanic counties in Texas like Bexar and El Paso previously voted for candidates like the left-wing populist Bernie Sanders in large numbers during the Democratic primaries in 2020. Class reductionist and conventional socialist politics enjoys significant popularity among the Hispanic working classes who are quite poor and more than eager to use the government to nab resources from greedy Anglos.

With that in mind, younger Hispanics are assimilating to the degenerate cultural leftist culture permeating across America’s body politic while maintaining vestiges of the class warfare politics of their forebears. Wokism + class warfare politics makes for a toxic cocktail that any sane American would avoid imbibing.

Frankly, I don’t even want to speculate what this will look like once more migrants and their descendants integrate themselves into the political process. One can only hope the Texas GOP gets a clue and starts going all out to push an immigration moratorium lest they want Texas’s premier cities morph into multiculti dumpster fires.