Some random notes from the email bag on my December Diary, in reverse order from that in which the topics were diarized.

Following the remarks about conformism—that is, about the liberal-progressive drive to flatten and homogenize our intellectual life—a friend emailed in with this, which I thought very apt.

Another thing that occurred to me during this election season is this old Radio Derb episode where you commented on Pastor Terry Jones of the Koran-burning fame:

“I nurse a strong romantic affection for the old, weird America, the America of grifters and medicine wagons, freak shows and traveling circuses, blind fiddlers and Mr. Bojangles, strange cults and charismatic preachers, sinister goings-on in rustic hollows and dark secrets under the magnolia blossoms ...

“Any time I get to thinking that the old weird America has been killed off for good by the lawyers and accountants and bureaucrats and developers, paved over so we can have more strip malls and big-box stores and liberal arts colleges and wind farms, every time I get depressed thinking that, the news turns up some character like Terry Jones to tell me it ain’t so.”

Well, with Trump we got another character to tell us it ain’t so, and with a force that nobody would have thought possible until recently!

At times I’ve reflected on why I find Trump impossible not to like despite his business practices that I find distasteful (selling shoddy products with a false luster of prestige and class) or borderline, if not outright unethical (the Trump University episode).

Well, there is of course the fact that on many issues our elites are so raving mad that if someone counters them with a little straight talk and common sense, as Trump has done, it’s hard not to support him no matter what.

But on top of that, there is also that factor of the unique, flamboyant, swashbuckling character of Trump sticking it to the modern American drab, conformist, politically correct, lawsuit-wary society, and showing with his vivid example that there is still some life in Old Weird America!

In a certain way, I find that his history of garish and dubious business only completes this figure, as if it's only fitting that such a character at some point ran his own medicine show.

Come January 20, we’ll see how much he is really able and willing to accomplish. Much like you, I am constitutionally pessimistic, but just saying the words “Attorney General Jeff Sessions” (how’s that for something that would have sounded outlandish two years ago!), it’s hard not to have some high hopes.

It is indeed.  Thanks for that.

I have a lot of people that refuse treatment.  Unfortunately their families sue us when they die.

A reader tells me the Germans have, or had, a word for it: Kampfsau.  I looked that up and sure enough:

Kampf means “fight,” a Sau is a sow and a Schwein a pig. Kampfsau and Kampfschwein are terms used in sports, particularly soccer, where they are applied to players who may be technically limited, but more than make up for it by their unflagging fighting spirit, by the abandon with which they risk, not life, but certainly limbs, fighting for the ball and tackling players on the opposing team. And if their jersey is not the dirtiest at the end of the match, they know they haven’t given it their best effort.

Calling someone a Sau or a Schwein in German is an insult, and a relatively bad one. But in combination with Kampf, these words turn into compliments: Kampfsäue and Kampfschweine (those are the plurals) tend to be fan favorites. [KrautBlog, April 3rd 2013.]

It’s nice of that blogger to limit the reference to sports.  We WW2 babies naturally have mixed feelings here.  All I shall say is that in defending one’s national integrity and demographic stability, a little of the Kampfsau spirit might not be a bad thing.

From a reader who locates himself in “the belly of the beast, i.e., the book publishing world.”

Print sales are basically flat, but there is no data suggesting that they are cratering. Ebook sales have been declining about 20% per year for several years. The bloom appears off the rose.

My impression is, though, that audiobooks are booming.  Everyone I know—including Mrs D—listens to the things when driving.  I’ve had a longstanding notion to record an audiobook of Fire from the Sun, but the snatches of opera in the book deter me.  I can’t sing.

Some progressives were shocked beyond measure that I should nurse disrespectful thoughts about Ta-Nehisi Coates, and should even be so hateful as to—OMG!—speak such thoughts out loud.

“Blaspheming” is certainly the mot juste.  Some of the comments you get in controversies like this are straight out of Afghanistan—and not the nicer parts of Afghanistan, either.

I can’t improve on the observation made by the late Larry Auster four and a half years ago:

Looping back to the business about stamping out oddity (see, my posts don’t merely have form and content, they have topology), I got into some amiable Twitter exchanges with Charles Murray on the Coates business.

Murray accused me of having gotten crabby.  I replied that I have always been crabby.  He came back with:

You used to be more genially crabby. Now I think you are having way too much fun pissing people off.

My reply to that was to quote Quentin Crisp at him: “Towards the end of the run you can overact appallingly.” 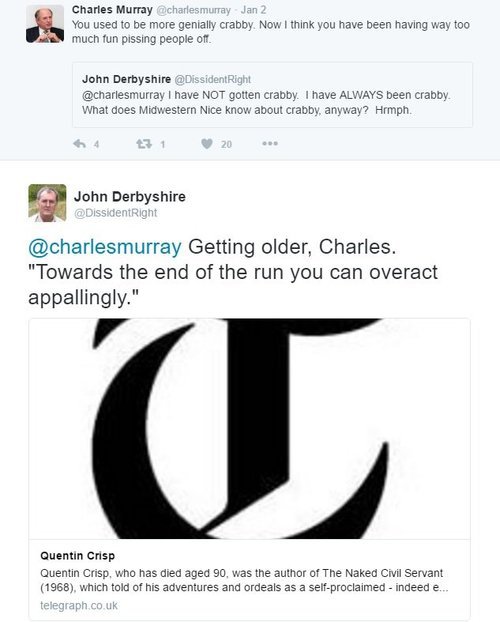 Crisp was a famous British oddity. Not many Americans know about him, so I attached a link to his obituary.

Peter Brimelow tells me that he and Crisp once shared the same publisher … professionally, I mean, of course.