Did Freddie Gray Self-Injure In Hopes Of A "Ghetto Lottery" Brutality Payout? We Don't Know, But We're Not Allowed To Ask 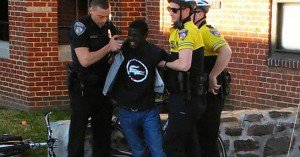 Looking for some information about Freddie Gray's arrest record I saw this link on Heavy.com.

A Baltimore City Police Officer claimed on Facebook that Freddie Gray intentionally "broke his own neck" in the back of a police transport van.

Doing a NEWS STORY about this is ridiculous "Guy posts on Facebook—film at 11:00!"

What's got them going is the blasphemy aspect. They think this is a crazy, evil, conspiracy theory from a member of the oppressor class—who they can get fired from his job.

Let me tell you why the theory—it's only that—is more reasonable than you might think.

Baltimore recently paid out $5.7 million in four years to 100 different litigants in settlement of "police brutality" claims.[Undue Force, by Mark Puente, Baltimore Sun, September 28, 2014] I learn this from the credulous squish Conor Friedersdorf in the Atlantic, who considers it evidence of “the brutality of police culture” in the (largely black) Baltimore PD.

That's ONE explanation. Another explanation is in two short words: "ghetto lottery." If you are unfamiliar with this expression, it means a lawsuit windfall experienced as a result either of claiming racism or your own bad behavior.

Fifty-seven thousand dollars is a lot of money to a street criminal, and that, according to Friedersdorf and the Baltimore Sun, is the average payout to someone who successfully claims police brutality. If you can show up at a police station with bruises and claim the cops did it, you may be in the money. Of course, if Gray did it, I’m sure he didn’t mean to kill himself. (Tasher, of course, didn’t say Gray intentionally broke his own neck as Heavy.com suggested.)

But if the theory is that the cops killed him by driving in such a way as to make him fall over and hurt himself—causing his death—then obviously he could just as easily done it himself. Friedersdorf, reviewing the payouts asks tearfully “What tiny percentage of the unjustly beaten win formal legal judgments?”

I’d like to ask what percentage of the “ formal legal judgments” were basically phony, and whether the moral hazard created by such payouts might lead to more self-injuries.