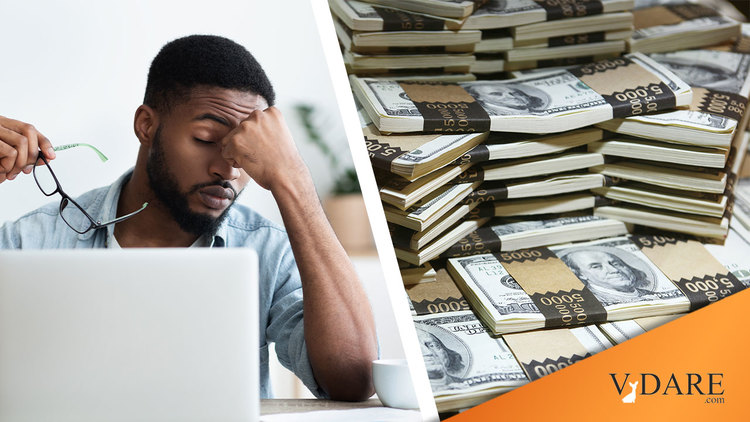 From Business Insider, an amazing article:

DEI execs are burning out amid the billion-dollar push to diversify corporate America: It’s hard to be both the advocate and the abused’

Much of the work required to push toward these goals falls to DEI executives themselves.

Without a change, executives say, their burnout could lead expensive diversity plans to fall short.

For over four years, she’s worked on corporate diversity, equity, and inclusion as the CEO and cofounder of The Melanin Collective—but never in a climate like today’s.

In the wake of the killing of George Floyd, her inbox has been flooded with requests from corporate and nonprofit leaders. They want change, and they want it fast. But at the same time, she felt many were not respecting her.

If you want a picture of the future, imagine a Person of Melanin complaining that you aren’t respecting her or them — forever.

Over the past few months, she said, business leaders have yelled at her, sent her demeaning emails, and even questioned the existence of racism in corporate spaces, despite her expertise and her lived experience as a disabled Latina.

When it comes to green-lighting DEI programs at the company, the source said, executives are all for it. But there’s little consideration of financially supporting the extra work that goes into making those goals come to life. …

In 2020, hires of diversity leaders in the S&P 500 spiked to as many as a dozen monthly — almost triple the rate of the previous 16 months, showed research from the executive recruiter Russell Reynolds Associates. Yet it’s also a field that faces uniquely personal, emotional pressures for the people who work in it, and structural barriers often prevent transformative work from getting done.

Insider spoke with eight DEI executives and consultants, many of whom report feeling under-resourced and under-supported by their leadership teams. A terrible irony came to light: Corporate America is betting big on DEI professionals to address inequities — to the tune of $35 billion. But they’re at risk of burning out long before equity is reached.

George Floyd died almost a year ago, but many DEI professionals still haven’t had much time to grieve or process the emotions and trauma they’ve experienced.

It’s almost as if DIE people don’t actually care about some fentanyl-abusing criminal, even though his death has brought them a financial windfall.

Instead — to execute their companies’ various initiatives, pledges, and donations — they’ve had to get to work.

The horror, the horror.

Randall Tucker — the head of diversity and inclusion at Mastercard, a $310 billion financial-services company that employs nearly 20,000 people — knows this all too well.

“I’m tired,” said Tucker, who’s been in the role for three years. “I think if any diversity and inclusion leader isn’t tired, they haven’t been doing their job, quite honestly.”

On top of helping to oversee a rollout of new initiatives within the company to increase diversity and inclusion, he’s had to struggle with his grief and anxiety in the aftermath of Floyd’s death. He said when he saw one of Floyd’s brothers, Philonise, talk about how much he misses his brother, he cried.

“I’ve been so worried about how we move the company forward. How do we move our employees and their well-being forward and give them the space to grieve?” Tucker said. “You are literally the person who has to take it all in and can’t really have the space to process your own feelings.

When did the term “process your feelings” become omnipresent? And why?

And there’s much work to be done. Mastercard’s most recent diversity data from 2019 showed that 69% of its executives were white.

To prevent burnout, Tucker exercises twice a day. In the morning, he goes for a heart-pumping ride on his SoulCycle bike. At night, he hits the treadmill. Tucker also takes advantage of Mastercard’s vacation and personal-day policies when he needs a break.

Sacha Thompson, the founder and CEO of The Equity Equation, a DEI consultancy, is booked through July and is hiring another consultant to help manage the workload. She said she feels a mix of excitement and frustration. An emerging trend: Company leaders are genuinely interested in championing diversity, but they don’t understand that all areas of their business may need overhaul.

“I am actually seeing companies wanting to do the right thing, which is very different than a year or two years ago,” Thompson said. “The frustration is that leaders still are not looking at this as a business imperative. They’re looking at it as a’nice to have.’”

When work gets difficult, Thompson lights a tropical-scented candle and listens to guided meditations.

At this point in the article, I started to wonder if this weren’t a big April Fool's Day spoof.

But, no, these are real people.

“If I’m prepped ahead of time that a call might be difficult — where people feel they’re being forced to have uncomfortable conversations related to diversity — I’ll take a few minutes to center myself,” she said.

Conversations around DEI can be hard to navigate. Some leaders may get defensive, push back, and question a DEI professional’s lived experience when faced with constructive criticism. Other executives may share their stories of racism, which can be triggering.

“I don’t think a lot of these companies or organizations are understanding the impact,” Thompson said, “when those that are being asked to lead these efforts are part of that marginalized community as well.”

The need to keep a professional face means that people who work in DEI have to do a lot of emotional labor — regulating their feelings, reactions, and expressions — especially in tense situations. And a body of academic research has shown that lots of emotional labor may lead to decreased productivity, increased stress, and a greater chance of burnout. …

When corporate executives fail to support their DEI colleagues, not only do DEI leaders have to engage in high emotional labor but they also experience a loss in motivation, said Janet Ahn, the chief behavioral science officer at Mind Gym, a psychology-based leadership consultancy…

DEI consultants spoke about another obstacle: not being respected by the companies that hire them.

Some executives said they would implement Quintanilla’s recommendations, which are based on employee feedback, such as leadership-development programs for all managers, but refused once they saw the amount of change she recommended.

Psychologists define psychological safety as the ability to show up in a space exactly as you are, without leaving parts of your identity at the door to fit into a culture or workplace. It’s the ability to express your opinions and ideas without fear, to speak and exist freely .

So a DEI professional who feels there is psychological safety can freely share direct feedback from nonwhite employees on how a workplace’s culture needs to change.

Specifically, the workplace’s culture needs to change so that only DIE professionals feel psychological safety, while everybody else feels around the DIE professional like a member of Stalin’s audience terrified to be the first to stop clapping.

If there isn’t psychological safety, they may have to tread lightly, cushion feedback with compliments, and adjust their tone to make sure leaders don’t get offended by feedback. All that self-monitoring creates additional mental and emotional work.

A lack of psychological safety can have extreme mental-health consequences, said Farah Harris, a licensed psychotherapist in Illinois. For Black, brown, and Asian DEI experts, there’s an extra layer of exhaustion when leaders dismiss their work. Working remotely, often alone, during a pandemic makes the work even more difficult.

“It’s hard to be both the advocate and the abused,” Harris said. “Not having psychological safety can result in feelings of anxiety, exhaustion, even depression.”