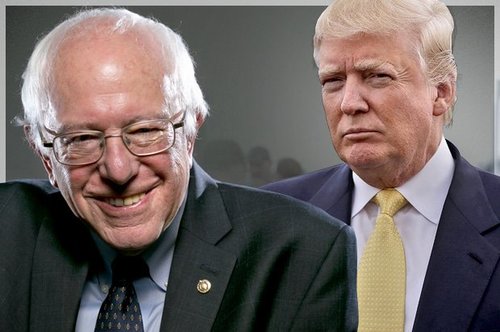 Dr. Norm Matloff has a post at this political blog UPON CLOSER INSPECTION (at normsaysno.wordpress.com) comparing Sanders and Trump on immigration:

Presidential candidate Donald Trump stunned the H-1B visa watcher community today with his platform on immigration. which includes surprisingly detailed, helpful provisions regarding H-1B. Very interesting, coming on the heels of his outrageous comments on Mexican immigrants, which among other things inspired the creation of a Trump piñata.

Meanwhile, a Bernie Sanders piñata may well be next. Seems that Sanders isn’t ideologically pure enough on the immigration issue to satisfy the Latino activists, who accuse him of using — horror of horrors! — Republican tactics in his nuanced stance on immigration. You’re “either with us or agin’ us” with that crowd.

By the way, it's worth remembering that Dr. Matloff is actually a Democrat. Breitbart links to this post with the headline:Floodgates Open: Top Democrat Professor Says ‘I’ve Never Seen any Politician’ with Better Immigration Plan than Trump, by Julia Hahn, August 17, 2015. So Matloff's perspective on Sanders is different from Michelle Malkin's.

In this post, I’ll comment on both Trump’s and Sanders’ positions, relating both to an interesting recent essay which defended the latter but arguably applies to both candidates.  Let’s start with Trump.

Trump’s proposals for handling illegal immigration are vintage Trump, some sensible, some off-the-wall, but on H-1B, the man gets an A+. I’ve never seen any politician, even Tom Tancredo, put up such an effective platform as Trump has. He decries that most of the visas go to the bottom two (out of four) wage levels in the legal requirements for H-1B, recognizing that the unrealistic prevailing wage law is at the heart of the problem. He insists that employers be required to give hiring priority to Americans. Most important to me is that, at least as stated, these provisions would go a long way to stem the visa abuse by not only the “Infosyses” (rent–a-programmer firms) but also the Intels, who are just as culpable. One nice added touch: He refers to pro-H-1B Senator Rubio as “Mark Zuckerberg’s personal senator.” :-)

I was happier about that than the part about deporting people.

Trump says in his platform what no other politician, including Sanders, is willing to say: Immigration is great in sensible quantities, but in its present form,  both legal and illegal, it’s hammering the lower and middle classes. Take for example the high black and Latino unemployment rates. The Democrats say the solution is education and the Republicans say the path is lower taxes and regulation, and though both may have points, Trump states the obvious — bringing in large numbers of low-skilled immigrants is going to harm the most vulnerable people in our society, our own low-skilled (including earlier immigrants). I detailed this years ago in an article in The Public Interest. Among other things, I quoted Antonia Hernandez, a very sharp and caring woman who was then head of the Latino activist organization MALDEF:

…migration, legal and undocumented, does have an impact on our economy…(in) competition within the Latino community…There is an issue of wage depression, as in the garment industry, which is predominantly immigrant, of keeping wages down because of the flow of traffic of people.

It's true that minorities are, as the saying goes, "hardest hit" by immigration. It's not appreciated how much this is true of Hispanics. (Cesar Chavez knew.) Go to Matloff's blog to read the rest.