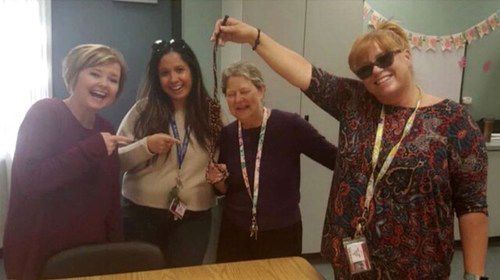 Four teachers and a principal have been placed on leave after a photo of the educators posing with what appears to be a noose circulated on email and social media.

The circumstances around the origin of the noose at Summerwind Elementary School in Palmdale and the response afterward are under investigation.

The photo shows four teachers smiling and holding a noose and was shared online without caption or context.

“I am appalled that this incident occurred,” Supt. Raul Maldonado said. “I am committed to the Palmdale Promise’s values of equity, integrity, and multiculturalism, and I know that most of the district believe[s] in the same values the Promise upholds. We will not allow the hurtful actions of a few hold back our district’s pledge to do right by our community.”

Outcry among parents and others in the community followed the discovery of the photo. Breyson Clemmons, a parent at the school, told the Antelope Valley Press that she kept her 10-year-old daughter home from school afterward.

There has been a dramatic increase in hate incidents in grades K-12 across the country, said Cyndi Silverman, the Anti-Defamation League’s director for the Santa Barbara and Tri-Counties region.

As Jussie Smollett tried to warn us, white racists, even Mexican ones, are obsessed with lynching blacks with nooses.

But from the L.A. Times this week:

Picture of smiling teachers with noose might be tied to notorious child abuse case
By COLLEEN SHALBY
MAY 13, 2019 | 4:35 PM

… One of the teachers in the photo is Jennifer Garcia. Garcia was the first-grade teacher of Gabriel Fernandez, the 8-year-old boy who was tortured and murdered by his mother, Pearl Sinthia Fernandez, and the mother’s boyfriend, Isauro Aguirre, in 2013. She repeatedly reported signs of abuse before the boy’s death and testified in June.

Man sentenced to death in torture, murder of boy he thought was gay

“The conduct was horrendous, inhumane and nothing short of evil,” the judge said in imposing sentence.

LOS ANGELES — A California man was sentenced to death on Thursday for the killing of a young boy who prosecutors said was tortured because he believed the child was gay, and the boy’s mother was sentenced to life in prison.

The child’s mother, Pearl Sinthia Fernandez, 34, pleaded guilty to first-degree murder in February and was sentenced on Thursday to life in prison without the possibility of parole. Aguirre was Fernandez’ boyfriend.

Gabriel died in May of 2013 in the working class high desert community of Palmdale, north of Los Angeles. Prosecutors said the boy’s skull was fractured, 12 of his ribs were broken, he was forced to eat cat feces, and that he slept, bound and gagged, in a cabinet.

“The conduct was horrendous, inhumane and nothing short of evil,” Lomeli said Thursday in imposing sentence.

“It is unimaginable, the pain that this child probably endured. And from what I heard, Gabriel was a kind, loving individual who just wanted to be loved,” the judge added.

Several agencies investigated abuse allegations leading up to Gabriel’s death, the Associated Press reported. On several occasions, investigators concluded there was no evidence of abuse.

Prosecutors have since filed charges of child abuse and falsifying records against four county social workers in Gabriel’s death.

In summary, this teacher, Jennifer Garcia, did everything right in reporting that her first grader was being abused, but then the bureaucracy dropped the ball for some reason. Eventually, the child was tortured to death, just as the teacher feared. She tried to stop it but nobody else cared.

Now, the highest punishment available under law has been declared by a court to be the just desert of the murderer. So, the heroine teacher and her friends celebrated with an old symbol of lawful justice upon murderers. (Of course, due to Governor Newsome, the death penalty won’t be carried out on the murderer, but at least judge declare it right and fitting punishment for what he did.)

And then random black people online got all work up and had the heroine teacher and her friends suspended and denounced because it just had to be about them.

Because isn’t everything about blacks?

After all, didn’t the attempted lynching of Jussie Smollett teach us that racists are everywhere with their nooses in 2019 trying to lynch black people?

And then the ADL helped put the boot in on the teachers, because of course they did.

By the way, I don’t see any word on the murderer’s immigration status.