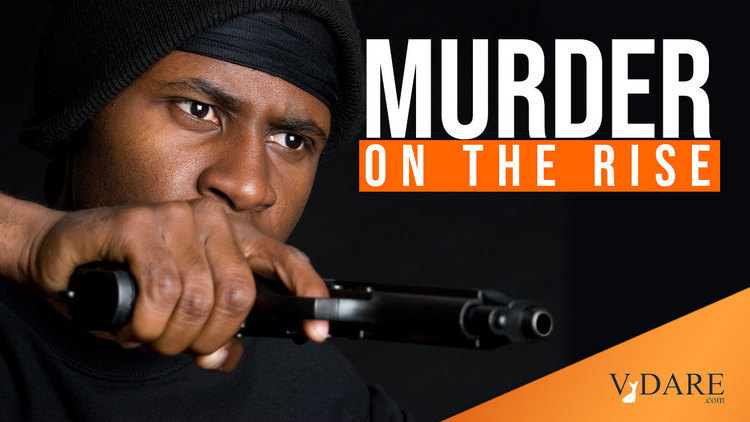 Earlier: The Racial Wreckening Sees Murders Up By Almost 5,000

The FBI has finally released its 2020 Uniform Crime Reporting data from most (but, as usual, not all) of the law enforcement agencies in the U.S. I concentrate on murders, the most accurately reported crime.

Murders and non-negligent manslaughters were up a record-crushing 29.4%, in line with my January 6, 2021 estimate: “Therefore, the national figure is perhaps in the 25 to 30 percent growth range, double the worst year previously recorded, 1968.”

In the FBI’s expanded homicide data, the black share of known murder offenders increased to a new record of 56.52%.

So the black share of murder offenders likely went up even more.

As usual, the FBI stats sloppily lump together Hispanics and non-Hispanic whites into a white supercategory that is out of sync with how most government agencies have thought about race and ethnicity over the last generation. Hence, I just look at black vs. nonblack (white, Hispanic, Asian, American Indian, etc.).

Which definition of black are the cops using when they charge somebody with murder? I dunno … probably some use one way, some another.

Incredibly, even the lower (at least part-black) ratio of 8.4 to one is a little higher than the per capita male-to-female known murder offender ratio of 7.5 to 1.

The percentage of police departments that submitted expanded homicide data in 2020 was up 3 percentage points over 2019, but still missed 15% of LEOs.

For example, although Louisiana has had the highest murder rate for the last 30 years, some analysts suspect that if more Mississippi PDs bothered to send in their numbers, Mississippi would be #1 with a bullet.