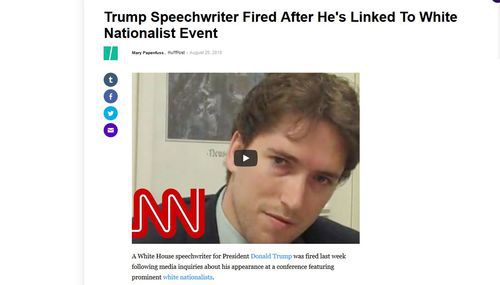 This is on Yahoo News right now:

Darren Beattie was terminated after the White House learned he had appeared on a panel with British white nationalist Peter Brimelow at the 2016 Mencken Club conference in the Baltimore area, CNN reported Sunday.

A brief word about the adjective "British"--Peter is British (born and raised in Lancashire) but has been an American citizen since before most Huffington Post reporters were born. Remember the media freakout when Trump referrred to a Hispanic (Mexican-American) judge as a "Mexican judge"?

Here's the Huffington Post's sourcing for calling Peter a "white nationalist"--it's the $PLC:

The Southern Poverty Law Center, which tracks extremists, called the conference a gathering of “white nationalists and pseudo-academic and academic racists.” The theme of the 2016 event was “The Right Revisited.”

Brimelow runs an anti-immigrant website called Vdare.com, where he publishes pieces by “white supremacists and anti-Semitic” writers, per the SPLC. He has described himself as a believer in “racial nationalism.”

My little girls will be still in their 20s in 2040, when U.S. will go majority non-white...unless the post-1965 immigration disaster is ended https://t.co/XiCRNySPwv

In a statement, Beattie said he gave an “academic” talk on “The Intelligentsia and the Right.”

“I said nothing objectionable and stand by my remarks,” he said.

Here's the quote (an interview at CPAC with Osita Nwanevu) where HuffPost says Brimelow describes himself as a believer in racial nationalism:

PB: Our position is that VDare is a forum site. That we will publish any view as long as they’re critical of the [Immigration and Naturalization Act of 1965]. Personally, I would regard myself as a civic nationalist.

PB: Yeah, my heart is with civic nationalism, but my head is with racial nationalism. Because I think that’s the way things are going—I think the country is precipitating out on racial lines. Don’t you?

Ask Alexandria Ocasio-Cortez--or Joe Crowley, the white Democrat she displaced--whether the country is precipitating out on racial lines.

The reality is that Peter Brimelow has been active in conservative politics and conservative journalism for many years, and has been "associated" with many Respectable people:

And many more, including the entire Editorial Board of National Review.(Can they be fired from something?) People he is not associated with in any significant way include Stephen Miller (Peter spoke a Duke University event when Miller was a college student) Steve Bannon (met him once at CPAC) and Donald J. Trump--with whom he did once have dinner, when they both lived in the same small town--Manhattan:

This guilt-by-association thing doesn't even require association any more.