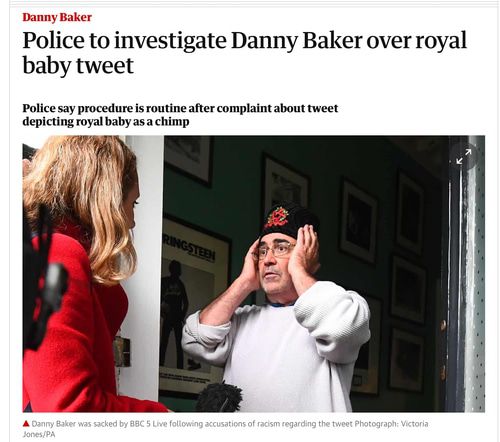 From The Email Bag: Royal Jokes, Welsh Folk, Will Asylums Get Woke?, Etc

Royals chimp joke.  In my May 10th podcast I told the tale of BBC Radio DJ Danny Baker being sacked for a bad-taste joke about the new royal baby. He'd tweeted a picture of two adults and a chimp, attaching the caption "Royal baby leaves hospital."

I want to give Danny Baker the benefit of the doubt,but I’m really struggling to find any reasonable explanation for this tweet, now wisely deleted. pic.twitter.com/EtL1JUIu96

Even as I filed the podcast, new headlines were popping up: "Police to investigate Danny Baker over royal baby tweet" etc.

More proof—as if more were needed!—that in the matters of racial orthodoxy and the cuck-cuck-craziness of the British authorities, you can never be cynical enough.

(Latest news is that the peelers have decided not to prosecute Mr Baker for badthink. I have no data on how many hours of police time were consumed in the investigation.)

Gâd i'r ddaear droi.  I advertised the sign-off music for that same podcast as "a lovely old Welsh hymn." Well, it's indubitably Welsh, definitely lovely, and at least arguably a hymn (if you allow some latitude for New Agey-spirituality), but no older than 1988.

That's the date of the Movie Working Girl, in which Carly Simon sings the song, in English. According to IMBd, Carly also wrote the song.

No fun, but not boring.  Several readers objected to the definition of boredom used in the survey I spoke about: "a boring day defined as one that involved simply no fun at all." It is possible, they told me, for a day to contain no fun at all yet not be boring.

You might, for example, have been engrossed in paid work all day—work you would not do un-paid—too busy to feel bored, yet the day none the less being fun-free.

Having, as I confessed, well-nigh no acquaintance with boredom, I can't argue the case with any conviction.

As I said, though, this is alien territory to me; and anyway, I'm too busy to think it through right now.

CATO-4321.  The mnemonic for homelessness in my April 26th podcast brought in a lot of email, including some from persons with expertise in the field. (And one from a listener who has actually been homeless, and has written a book about it).

The sense of the meeting is that the mnemonic—which I had taught to me by a friend 40 years ago—is still fairly apt today, but needs adjusting.

The following is one of the more authoritative-sounding emails I got, this one from a listener who worked closely with the homeless very recently. Sample from his email, going through the four mnemonicized categories:

C (Crazy): I suspect he [i.e. the friend who taught me the mnemonic] radically underestimated the percentage of homeless who are crazy.

Our County nurse, who ... won my heart when, in a staff meeting, she described one of our "guests" as "bat-shit crazy," estimated that around 95 percent of our homeless were suffering from some degree of mental illness; ranging from relatively-mild anti-social personality disorders, to full-blown paranoid schizophrenia.

A (Addicts): Most of our "guests" were chronic substance-abusers, either of drugs, alcohol, or both; and there was significant overlap with the "C" category above: many (most?) were both mentally-ill, and addicted.

T (Tramps, i.e. people who like being homeless): Very few of the folks I encountered were transient hobos in the traditional sense: normal people who simply enjoyed roaming around. Quite a few of our "guests" had a history of frequent relocation, but that seemed to be more related to C.

O (Out of luck, i.e. non-crazy non-addicts who would much rather not be homeless): Very few people I encountered— easily less than 5 percent—fit this category: normal folks who had simply encountered a spell of bad luck. But I’d agree with your friend’s assessment that these were the only folks for whom "a hand up" actually accomplished the desired purpose of lifting them out of homelessness and back to a normal life.

For the rest of the people the Center served, all we were doing was making their life of homelessness a bit more bearable. I’m quite certain that five or ten or twenty years down the road, the vast majority of them will still be in the same circumstances.

Institutionalizing crazy people.  On the related issue of whether people who act in some seriously antisocial way should be locked up, I stand steadfast on the opinion I expressed: that if we leave it to the public authorities to decide the precise meaning of "seriously antisocial," definition creep will set in real fast, and they'll be locking up harmless people with heterodox opinions—people like us contributors to VDARE.com.

Look around: Powerful people are itching to do this already.

You can argue particular cases—I'll allow, grudgingly, that the guy who threw a child off a mall balcony  is a borderline case—but the irreducible fact remains: In many situations where a person is homicidally crazy, we cannot know he is homicidally crazy until he has performed some homicidally crazy act. Up to that point he's just a person who's a bit weird—often not even that.

I absolutely do not want to live in a society that locks up people who are a bit weird, not even if it saves a life here and there.

Is that crazy?  Well, maybe a bit weird …