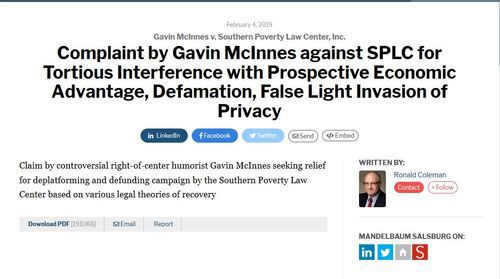 Gavin McInnes's Lawyer Ron Coleman: Deplatforming Is The Perfect Crime, But It CAN Be Fought

How can victims of deplatforming fight back?

A thread from lawyer Ron Coleman, viewable on Twitter, or via ThreadReaderApp in one place.

I've quoted it below, but let me remind you that we have our own legal fight against similar forces, and a Legal Defense Fund here.

How can victims of deplatforming fight back?

Gavin McInnes was deplatformed largely, if not entirely, as a result of the efforts of an extremist left wing hate group called the SPLC. Early this year, we sued the SPLC - not the platforms - on his behalf.

SPLC made, as expected, a motion to dismiss the complaint. We responded with this:

It's heavy stuff, but you can see how we have responded to the typical (and entirely predicted) arguments in a case like that.

Laura Loomer's deplatforming was accomplished largely by the urging of another hate group, CAIR, which is the US face of the terrorist group Hamas.

We sued CAIR on her behalf. You can read Laura's lawsuit at

In Laura's case, we also sued Twitter, because we have very solid grounds - as the complaint explains - to allege that it was more than a (comparatively) passive actor in the process of her being shut down.

The defendants have not yet responded to that lawsuit.

Other plaintiffs will undoubtedly assert other kinds of claims, or variations on the ones we made on behalf of Laura and Gavin, and name other parties in future litigation. I am not going to weigh in here on claims brought by other lawyers, or ones I might still be working on.

None of these cases has been tested in court yet, but the process of finding the litigation approach to breaking through and achieving justice for people who have been damaged by deplatforming is under way on many fronts.

Each case has to be considered on its own merits, or lack of them. I have, unfortunately, had to tell a number of prospective plaintiffs, some of whose names you might now, that I did not see a way to make a claim for them under the law as I understand it.

The McInnes claim sounds primarily (not solely, however) in defamation. Laura's is more of a classic tortious interference case.

Whether to sue at all, the legal theories to pursue, the choice of defendants and the venue all need to be considered carefully.

Clients contemplating such claims, for their part, also need to pay a lot of attention to whom they should choose to represent them. Unfortunately, the choices are limited. Not too many people have the experience and skills to do this work, and among those who do, few will.

Even then, from the pool who can and will, plaintiffs need to choose the RIGHT guy or gal - same as in any case, of course. I do not pretend to be the right guy for everyone (nor am I open to representing everyone, even if his case is otherwise solid).

Money is another thing. It's a real thing, too.

But before we talk about that, a related point:

Everyone thinking about these cases, either as spectators or potential litigants, needs to understand the nature of the defendants. First off, and to my point, they're rich as hell.

Unlike most businesses, the major social media and payment platform corporations, or major left wing hate groups like SPLC and CAIR, will not be incentivized to change their behavior by fear of incurring legal fees. They're loaded and heavily supported by major institutions.

Also, they use lawsuits as opportunities for fundraising. Being sued is likely a net financial gain for them, at least in the short term.

Second, there is very little room for these outfits, unlike in most litigation contexts, to settle, especially if a case has a high profile. There are rare exceptions, but they don't tend to be seen with respect to the social media platforms. Once they compromise, it's over.

There are a lot of other factors that make these cases very difficult. One important one is the interplay of the mainstream media and the news and information power of search engines, which combine to make deplatformed plaintiffs the bad guys.

Google the names of the two clients I've mentioned above or search their names on Facebook and you'll agree that I am representing people who have quite justifiably been ousted from polite society, online and otherwise.

This has an effect on every step of the process.

I left my previous law firm because it wouldn't take the risk as being known as the firm that sued Google on behalf of "the Nazi Twitter" - which is how the social justice industrial complex spun Gab.ai.

It didn't matter that the widespread promulgation of this falsehood was exactly why Gab needed, and was entitled to, legal relief. The more invested in the system an institution is, the more vulnerable it is to this terrorism. Deplatforming is the perfect crime!