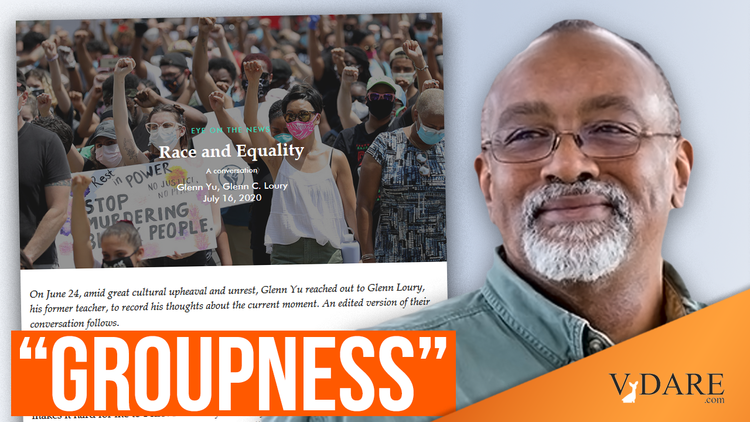 Four years ago I wrote a VDARE.com blog arguing that "white privilege" is one of the stupidest ideas of our time.  The basic point was that all the pro-"diversity" browbeating which whites in white-dominated societies are forced to endure could make sense only if there are systematic differences between races—differences beyond the trivial factor of skin color.  Else how could racial diversity in a population possibly offer any (touted) benefits?

And because of those systematic differences, a society developed overwhelmingly by whites might not be a good fit for people of other races.  Then it makes no sense for those of other races who choose to live in white-built societies—such as immigrants who hail from Third World countries—to complain about "white privilege."

It's a matter of simple logic.

Well, someone of real prominence has noticed the same logic: While he didn't talk about "white privilege," Brown University social-sciences professor Glenn Loury, who is black and conservative, noted the connection between difference—equivalent here to diversity—and what he terms "groupness" in a recently published interview conducted by one of his former students:

What is the nature of the world that we live in? Why would I ever expect that there would be parity across the board between ethnic, racial, cultural, and ancestral population groups in an open society? It’s a contradiction because difference is a very fact of groupness. What do I mean by a group? Well, it’s genes, to some degree; it’s culture; it’s networks of social affiliation, of intermarriage and kinship. I mean the shared narrative, the same hopes, the dreams, the stories. I mean the practices of parenting and filial piety and whatever else there might be.

But now you’re telling me that they don’t matter for who becomes a partner in a law firm? They don’t matter for who becomes a chair in the Philosophy Department somewhere? Groupness implies disparity because groupness, if taken seriously, implies differences in ways of living life. Not everybody wants to play the fiddle. Not everybody wants to dunk a basketball. Not everybody is frightened to death that their parents are going to be disappointed with them if they come home with an A-minus. Not everybody is susceptible to being swayed into a social affiliation that requires them to commit a violent crime in order to prove their bona fides. Groups differ. Groups are not evenly distributed across society. That’s inevitable. If you insist that those be flattened, you’re only going to be able to succeed by imposing a totalitarian regime that monitors everything and jiggers everything, recomputing and refiguring things until we’ve got the same number of blacks in proportion to their population and the same number of second-generation Vietnamese immigrants in proportion to their population being admitted to Caltech or the Bronx High School of Science. I don’t want to live in that world.

Next step: We can hope that Professor Loury recognizes and riffs on the fact that "The problem of ethnic diversity is insoluble."